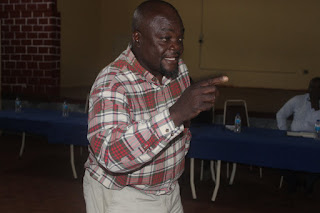 Itai Muzondo
As Zanu-PF factional disputes continue to escalate by the turn of each day, the party's acting provincial chairperson Amasa Nhenjana last week told his fellow G40 members that it was time to take gloves off and fight Team Lacoste (those aligned to Vice President Emerson Mnangagwa) openly.
Speaking during a Zanu-PF MPs consultative meeting at Paradise Motel in Gutu last Thursday, Nhenjana said he was tired of hiding in the name of 'respect' whilst he is being openly challenged.
"I am not afraid; I grew up as a boxer. Just like in the past, I am back to my game but with gloves off. I am now fighting those who dare say I am not the chairman. I'm more surprised when an MDC offspring tries to be more popular than me," Nhenjana said.
In agreement, provincial youth chairperson Nobert Ndaarombe said no one has power to remove Nhenjana.
"People must not bark around scolding the First family. How can people say they love the President when they don't love his wife…why go on to say down with your fellow comrade instead of the common enemy, the opposition? Some of those people will soon be like leaves fallen from a tree, zvichapera zvehugodfather izvo," (the godfather mentality is soon coming to an end) the youth leader challenged.
Challenging Minister of State for Masvingo Provincial Affairs Shuvai Mahofa's ban of Gutu South legislator Paul Chimedza and Gutu South MP Tongai Muzenda constituency programs and projects, Zanu-PF Provincial Commissar Jeppy Jaboon said no one had the powers to stop the two from discharging their duties.
"All chairpersons who were voted into positions in 2013 and had been booted out should take back their positions with immediate effect. To Chimedza and Muzenda, resume your projects and bring development to your constituencies. Those who are trying to divide Zanu-PF by halting development and upsetting party structures are simply drowning themselves in hot soup," Jaboon fumed.
Not to be outdone Masvingo Urban MP Daniel Shumba said people should shun going to unscrupulous meetings lest they get involved in (Team Lacoste) meetings meant to remove the President.
"If you follow some of these games, don't be surprised that they turn to be coup d'état and I will be sorry if any one of us here is caught up in the crossfire. I warn you from experience because I witnessed and was a victim of the Tsholotshlo meeting," Shumba advised.
"We went to war together with my friend Gwanetsa present here, those we killed are not here. So who are these minions to fight us? If they are lost as party elders, we hit with the elbow and simply move forward," he added.
Also present at the meeting was Mafios Utete, Ephraim Gwanongodza, Robson Mavhenyengwa, Darlington Chiwa, Denford Masiya and Robert Mkwena; and eight MP's among them Paradzai Chakona and Davis Marapira, Vincent Mawere, Samson Mukanduri, Vincent Mawere, Lamson Matavire and Angeline Chipato sending apologies.news
--
Tel :         +263 39 262 401
Website :    www.tellzim.com
He who said it can not be done must not disturb the one doing it!
Share !