Home » »Unlabelled » 'Mnangagwa one step in'

'Mnangagwa one step in' 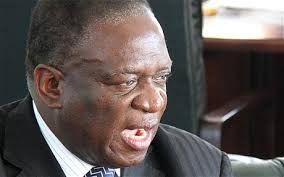 Upenyu Chaota
War veterans last weekend pulled off their gloves and unleashed their wrath on Generation 40 (G40), saying the faction that is allegedly led by Grace Mugabe is a Western-funded project meant to destroy the ruling party from within.
Speaking during an explosive meeting at Masvingo Polytechnical College last Saturday, the war veterans hailed Vice President Emmerson Mnangagwa whom they equated to biblical Moses.
Taking turns to praise the embattled VP whom they said will definitely succeed President Robert Mugabe, the visibly angry war veterans repeatedly chanted the contentious slogan 'Pasi ne G40' from the start of the meeting right to the end.
Although he tried hard to speak in metaphors, war veterans Secretary General, Victor Matemadanda made his point clear, saying it was foolish for anyone to believe that Mugabe will be succeeded by anybody other than Mnangagwa.
"Mnangagwa will never unseat Mugabe – he will patiently wait but kana vaMugabe vasisipo (when Mugabe is no longer there) …," said Matemadanda without completing his statement amid thunderous applause from the floor.
"Mnangagwa is already one step in …he (Mnangagwa) worked with Mugabe for over 50 years now, nhasi ndiye oita havi iyo mhino yapinda? Mnangagwa is not under any pressure, in fact how can you be seen putting yourself under pressure to get in the bus when you are already inside? Those outside are the ones under pressure, not Mnangagwa," said Matemadanda.
Punctuating his speech with bits of the Karanga dialect, Matemadanda sounded as if he wished he were from the southern region of the country and as if to say it was a given that the next President would be none other than Mnangagwa.
The outspoken war veteran also savaged Zanu-PF Masvingo provincial political commissar, Jeppy Jaboon who is believed to be a disciple of G40, saying he was a small boy who did not understand how the country is ruled.
Matemadanda said war veterans do not recognise the Acting Zanu-PF Masvingo provincial chairperson Amasa Nhenjana saying he was imposed on them by Saviour Kasukuwere.
"As war veterans we nullify the decision to suspend Ezra Chadzamira from his post as provincial chairperson. According to us, Chadzamira is still Zanu-PF Masvingo provincial chairperson – not Nhenjana," said Matemadanda.
Matemadanda took also took the opportunity to congratulate Minister of State for Masvingo Provincial Affairs, Shuvai Mahofa saying she was lucky to be alive since some people wanted to kill her for supporting Mnangagwa.
"I am happy to see you Cde Mahofa, you were supposed to be the first to die but they failed," said Matemadanda without elaborating.
Mahofa thanked the war veterans for being with her in their prayers while she was undergoing treatment in South Africa.
"I am sorry to address you while seated because of my health. I am lucky to be alive and to be with you all today. I could have died but because of your prayers I made it out of hospital."
"Before I came here, some people called me saying I must not attend the meeting but I told them we have to defend the revolution. Even if I die today, I know I would have contributed towards safeguarding of the revolution," Mahofa said.
Zanu-PF Youth League national secretary and politburo member Pupurai Togarepi also told the gathering that his life was in danger.
"They want to kill me for standing for the truth. My life is in danger but I will soldier on, I will not quit. Muduvuri and I are targets but we are not looking back.
"Mutsvangwa has been loyal to the President for so long but now he is labelled a sell-out. We have a problem with political scientists who teach what they would have researched in America. People create lies because they want positions," said Togarepi.
Former Zanu-PF central committee member Jimaya Muduvuri, who was involved in an accident near Mvuma while on his way to the meeting, narrated how he cheated death.
"I was almost gone macomrades, these people kill and they are targeting me and Togarepi. I am a man on a mission and I shall not stop. VP Mnangagwa is the one who sent me to do this job and I will be doing this to the dot," said Muduvuri.
War veterans national chairman, Christopher Mutsvangwa, who was the guest of honour, castigated ministers who belong to the G40 faction saying they were clueless and only good at twitter.
"G40 ministers are all fools and they do not know how to attract investors. They are given money by Wicknell (Chivayo) so that they go and buy groceries from Dubai but they are very selfish and naïve," said Mutsvangwa.
Mutsvangwa said his time as a cabinet minister was horrible as he had to be in meetings with G-40 ministers who were 'daft'.
"Now they say war vets want Mugabe out. We put Mugabe into office and stood by him all this long and they say we want to betray him now. They should keep dreaming. This is the problem of dealing with people without a direction," said Mutsvangwa.
The meeting was attended by over one thousand war veterans from Masvingo province and some representatives from all the ten provinces in the country.news
--
Tel :         +263 39 262 401
Website :    www.tellzim.com
He who said it can not be done must not disturb the one doing it!
Share !