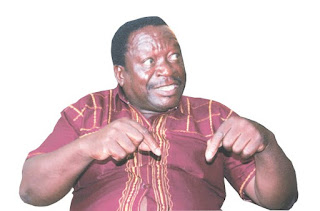 TellZim reporter
Combative war veterans chairperson, Victor Matemadanda has urged war vets to reject bond notes saying they will be introduced to enrich a few individuals in the G-40 faction.
Matemadanda was speaking at a war veterans meeting held at Masvingo Polytechnical College last week Saturday.
"The black market is already there – and now they want to bring bond notes? This must be a joke, where is the money – I mean US dollars! These people think they are clever, they are very corrupt and they want the ordinary person to suffer.
"I passed through town only to see thousands of people queuing to get their money – that is not acceptable at all," said Matemadanda.
Turning to the missing US$15 billion, Matemadanda said it was shocking that no one was arrested over the issue, adding that it was proof that some ministers know the person(s) who took the money.
"USD$15 billion went missing and there are people who know the exact figure to the last cent but I shudder to imagine no one knows where the money is. No arrests have been made and no suspects were apprehended. This clearly shows the levels of corruption in this government.
"For the past months there were no queues at banks like what we are seeing today. There was enough money for everyone, where did the money go now. Are the banks leaking? They want to give us bond notes while they loot all the US dollars," bemoaned Matemadanda.
The current cash shortages were caused by one of the alleged G40 frontman, Patrick Zhuwao, who caused panic in the banking sector earlier this year with his threats to forcibly shut down foreign banks that failed to meet requirements for his discredited interpretation of indigenisation.news
--
Tel :         +263 39 262 401
Website :    www.tellzim.com
He who said it can not be done must not disturb the one doing it!
Share !