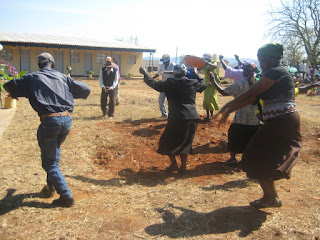 NYAJENA – A local Christian aid organisation, Community Based Aid Programme (CBAP) last week commissioned a new waiting block for expecting mothers at Musvovi Clinic in ward 26, bringing to an end the long wait for a project which had stalled midway.
The CBAP has its roots in the Reformed Church in Zimbabwe (RCZ) and has been on a drive to improve access to health particularly maternity and child care through various programmes in the province.
Speaking at the official opening ceremony, acting District Medical Officer Magaret Gumbo praised CBAP and the community for working together, saying the project will contribute to health delivery services in the area.
"Musvovi is the first clinic to attract such huge stakeholder interest. Thanks to CBAP and its partner Crown Agency for rescuing the project," said Gumbo.
Ward councillor, Elias Jera praised the CBAP for devoting time and resources on the project and thanked Masvingo Rural District Council for supporting the project by unveiling the plough back funds which were used to start the project.
Chief Nyajena's son Masarirambi Zengeya who stood for his father, said the area was fortunate as host to various developmental programmes and initiatives like last year's World Literacy Day commemorations.
"We are a fortunate people because we are receiving developmental programmes. I am certain this building will help our community," said Nyajena.
The nurse-in-charge at the clinic, Faith Rupende thanked the community and other partners who made the project successful and called for more assistance so that mattresses and other required logistics can be bought.
CBAP Director Samuel Mhungu praised the community and said his organisation started working in ward 26 as far back as 2007 and has seen the people's commitment to development.
"We saw the commitment of the people during our workshops with them and we later decided to intervene and complete the project as an acknowledgement of the community's efforts," said Mhungu.
The CBAP is spearheading other health programmes like the Community Mobilisation for Improved Access to Care and Treatment and is also promoting the Prevention of Mother to Child Transmission (PMCT) by giving material support to health institutions in rural areas.news