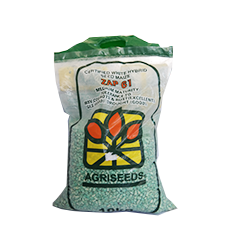 As AgriSeeds, we will this year spread further by exhibiting at the Masvingo Agricultural Show exhibition where we will be showcasing hybrid maize seeds ahead of this year's farming season.
During this year's Masvingo Agricultural Show, we will be focusing on marketing the newly available hybrid seed as we are moving from the traditional open pollinated varieties we have usually been offering.
Though the old Open Pollinated Varieties that consist of ZM 521, ZM401 and ZM 309 are still available on the market, AgriSeeds will unveil the advantages of four hybrid seeds which are given below:
ZAP 61 is an early maturing (120 – 135 days) white, hard grained, flinty hybrid that tends to double – cob. It is tolerant to maize streak virus, rust and cob rot with very good grey leaf spot tolerance making ZAP 61 very suitable for irrigation. Having good drought tolerance, ZAP 61 is widely adapted to all maize growing areas of the country – even areas of low fertility. Yeild potential is +10mt/ha.
ZAP 55 is an early maturing (120 – 132 days) hybrid with very white semi-flint grain. ZAP 55 has excellent adaptability to drought and low nitrogen levels (low fertility levels), along with good tolerance to leaf diseases where ZAP 55 can even be grown in parts of natural region 5. ZAP 55 has good grey leaf spot and maize streak virus tolerances, where this hybrid can be grown in both high and low rainfall areas where it can reach 9mt/ha.
R 201 is an early maturing (120 – 125 days) white dent hybrid which has excellent drought tolerance and flowering synchronization, making it highly suitable for dyer maize growing areas. R 201 tolerates the heat and drought stress of natural regions 4 and 5 well. Harvest reaches 9mt/ha.
R 215 is an early maturing (125 – 135 days) white dent hybrid that is higher yielding than R 201 in similar environments and harvests up to 7mt/ha. This hybrid should not be grown in areas of high humidity and heat.news
Share !