The family of the late liberation struggle stalwart and former Vice President, Dr Simom Vengesai Muzenda will continue to support initiatives meant to develop golf in Masvingo province starting with school children, Captain Vitalis Muzenda, the late national hero's son has said.
Speaking during a prize giving ceremony after the first day of the 2016 Simon Vengesai Muzenda Golf Championship held at Masvingo Sports Club on Saturday and Sunday, Cpt Muzenda said the Simon Muzenda Foundation remains committed to nurturing new talent in the sport.
"We are fully committed to taking golf to young children and support their progress in the sport. We are impressed by progress that is being made at Don Bosco Primary School," said Cpt Muzenda.
He was referring to the intensive efforts that are being made by St Don Bosco Primary School to get more pupils to play golf.
The tournament, which is held yearly to celebrate the life of the late Vice President, attracted players from all corners of the country with several winners walking away with fabulous prizes.
The event was also graced by the national hero's widow, Maud Muzenda who handed several golf kits to Don Bosco and Victoria primary schools as part of the family's golf development efforts.
This year's edition, which was managed by Zimbabwe Golf Association manager, Boniface Chigorimbo, was broadcasted live by Star FM.
On day one, the A Division (0-15 handicap) played the medal format, and the winners, were Liberty Gumisa; 3 handicap  on 72 gross and 69 nett, Richard Masiya; 12 handicap on 81 gross and 69 nett, and Stanley Karamela; 9 handicap on 79 gross and 70 nett.
B Division (16-24 handicap) played individual stableford and the winners were David Nhepera; 24 handicap on 43 points, Happison Tazviinga; 18 handicap on 37 points and Brian Mbaraja; 24 handicap on 37 points.
In the Skills Division, nearest the pin on hole number 3 was Tafara Mpofu while nearest the pin on number 18 went to Ziyaad Khan. Longest drive on number 8 was John Mlazi with longest drive on number 10 being Tafara Mpofu.
Most golf was taken by Brighton Machowa.
On day 2, the A Division played the medal format and the winners were Masiya on 80 gross and 68 nett, Patrick Mangwiro; 8 handicap on 77 gross and 69 nett and Karamela on 79 gross and 70 nett.
In the B Division, the game format was individual stableford and the winners were Tomas Mbetu; 16 handicap on 42 points, Setfree Mapuvire 23 handicap on 41 points and Nicholas Manjoro; 18 handicap on 40 points.
In the Skills Division, nearest the pin on number 9 was Martin Masvimbo while nearest the pin on number 12 was Mbetu.
Longest Drive on number 2 went to Cephas Ngwenya with longest drive number 15 going to Mbaraja.
Overall winner for the two days of the tournament in A Division was Masiya on 137 nett and number two was Gumisa on 142 nett. Overall gross winner was Gumisa on 148 blows over 36 holes.
B Division overall winner was Manjoro on 75 points counting out Mapuvire who managed 75 points.
"Our gratitude goes to the Muzenda family for a successful tournament, and for their efforts to put Masvingo on the map of top golfers," said Masvingo Golf Club captain, Cassian Mutsambiwa.news 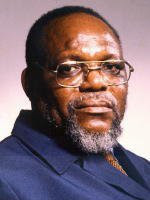