BIKITA - Bikita Rural District Council (RDC) has completed wide consultations for its proposed US$3.7 million budget for the year 2017 which has been well-received by stakeholders.
Due to the current economic problems, the budget is less than 50 percent of the previous one which stood at US$8.2 million.
Last year, Bikita RDC managed to collect only US$1.6 million out of the budgeted US$8.2 million, a situation which forced the council to propose the lower but more realistic budget this year.
Bikita RDC Chief Executive Officer (CEO) Peter Chibi said they learnt a lesson from the 2016 budget that they have to budget realistically.
"We recorded huge short falls in the revenue we had expected to generate because most of our income generating projects failed to take off. Our revenue generating areas, particularly the estates, where we sell stands have failed to provide the much needed money and sales have dropped," Chibi said.
"The government is not forthcoming with grants and that makes it unreasonable to draft a big budget that will not materialise. It is better to work on a smaller budget while prioritising the most basic services," he said.
Chibi said council had adopted austerity measures; cutting on expenditure while giving priority to critical basic areas like health and infrastructure development. 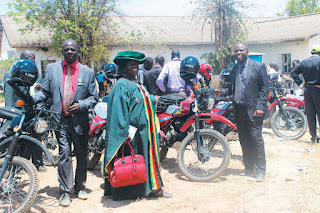 BIKITA - The Bikita Rural District Council (RDC) last week handed over 32 motor bikes to its councillors so as to ease their movement in wards for the sake of service delivery.
Bikita RDC Chief Executive Officer (CEO) Peter Chibi said the move is a result of planning that began in 2010.
"The wards are so big and it is difficult for councillors to move around. That is why we worked hard to get these motor bikes. It's meant to improve service delivery," said Chibi.
He said each motor bike is valued at US$1 389 and the council will pay 43 percent while the councillors will settle the remaining 57 percent.
"We want this to be an on-going initiative with those coming in 2018 being given a chance to own motorbikes too. We want councillors to come and debate issues that come from the people because they will have contacts with the grassroots," said Chibi.
Bikita RDC chairperson, Clara Makura thanked the council on behalf of councillors saying the motor bikes must be put to good use so as to develop communities.
"These bikes will make our jobs easier and we hope the councillors will use them for the benefit of the people.
"I plead with councillors to exercise caution because these bikes will send them to the afterlife if they drive them recklessly. We want everyone to be safe so that we can finish the jobs we were given by the people," said Makura.news
Share !