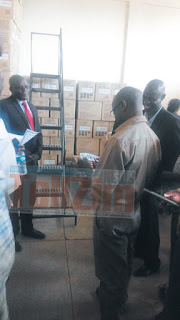 Masvingo urban councillors last week toured the Zimbabwe National Family Planning Council (ZNFPC) facilities to familiarise themselves with the services that are offered.
Councillors present included Godfrey Kurauone of ward 4, Lovemore Mufamba of ward 10, ward 3's James Chiwara, Against Chiteme of ward 5, Tarsisio Mandava of ward 2 and Mayor Hubert Fidze who is also the ward 6 councillor.
ZNFPC provincial manager Peter Vhoko told the councillors the tour will help them promote professional family planning advice in their wards
"We are aware that you have a lot of questions to answer when you are in your wards. This will surely help you to answer health and family planning-related questions," Vhoko said.
He encouraged citizens to visit ZNFPC for counselling, family planning advice and other related services saying his organisation has capable people who are eager to help.
"Our staff is highly trained. They know how to handle situations and people should come in numbers," he said.
ZNFPC Masvingo also serves other provinces like Midlands, Matebeleland South.
Speaking during the event, Fidze said ZNFPC Masvingo was a source of pride as it was diligently serving other provinces as well.
"We were not aware that the health backbone of other three provinces is in our city. Council will do all that it can to publicise and promote the services of ZNFPC for the good of our community," Fidze said.news
Share !