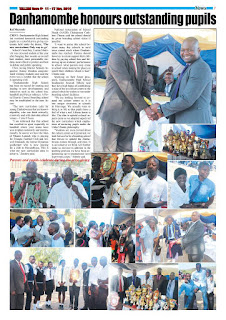 CHIVI - Danhamombe High School last weekend honoured outstanding pupils at a colorful prize giving ceremony held under the theme, 'The new curriculum: Only way to go'.
School's head boy, Laston Mudzviti was crowned student of the year after banging four awards as overall best student, most presentable student, most effective prefect and best in debate and public speaking.
Chivi Acting District Schools Inspector; Kenny Zendera congratulated winning students and said the event was a symbol that the school is operating well.
"Danhamombe High School has been on record for starting and leading in new developments and initiatives such as the school bus, handball and Hexco subjects. A Rural District Council boarding school may be established in the near future.
"The new curriculum calls for young Zimbabweans that are knowledgeable, who can think critically, creatively and with desirable ethical values – Unhu/Ubuntu.
"I am informed that this school has excelled in sport especially in handball where your teams have won trophies nationally and internationally. In soccer we have the likes of Nhamo Lameck who is playing for Triangle Football Club and Artwell Mukandi, the former Dynamos goalkeeper who is now playing for a club in Mozambique. This is what our new curriculum aims to achieve," Zendera said.
National Association of School Heads (NASH) Chairperson Cuthbert Chuma said the school should be given boarding school status if possible.
"I want to praise this school because many day schools in rural areas cannot reach where Danhamombe has reached. Parents should however in return support their children by paying school fees and following up on students' performance in school. Most parents only come to school when looking for places to enroll their children which is bad," Chuma said.
Speaking on their future prospects, Danhamombe High School headmaster Josayah Sithole said they have high hopes of establishing a state of the art culture centre at the school which he wishes to run under boarding school facilities.
"We are looking forward to expand our culture centre as it is one unique structures in schools in Masvingo. We actually want to bring it to life so that pupils have a feel of what a real African home is like. The idea to uphold cultural aspects came as we adopted aspects of the new curriculum which emphasizes of nurturing pupils under the Unhu/Ubuntu philosophy.
"Students are even excited about the culture centre so if permitted, we look forward to be a boarding school that thrives to uphold the Zimbabwean culture through activities. It is an initiative we think will further make us relevant in addition to the sporting prowess we have been experiencing up to international level in previous years," Sithole said.news
Share !