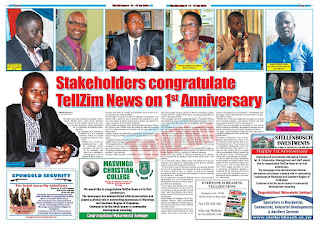 The fastest growing community newspaper in Zimbabwe, TellZim News, which covers Masvingo province and the southern region of the country, has been praised by various stakeholders for its community development reporting niche.
The newspaper was launched in November 2015 at a colourful ceremony which was graced by dignitaries from all walks of life.
TellZim News, which was transformed from a website promoting citizen journalism, was born out of the realisation that there was a communication gap due to a lack of a newspaper dedicated to helping ordinary people to tell their own stories in a manner that amplifies citizen voices to service providers and solution holders.
The newspaper's unique and objective approach to journalism in an industry that is generally seen as polarised has endeared it to ordinary news readers, business interests and academics who regard it as a game changer in the local media landscape.
Media Institute of Southern Africa (MISA Zimbabwe) director Nhlanhla Ngwenya said TellZim News has defied the odds and sustained itself in a tough economic environment that has seen other players closing shop.
Ngwenya said he was particularly impressed by the newspaper's in-depth coverage of political issues and its precise presentation of those stories.
"The paper has done well in its factual coverage of politics and is more credible than some bigger national papers on analytical reporting.
"We frequently refer to TellZim News for insights into trending political topics as well as for an understanding of the dynamic political issues in the country. I have no doubt the paper is playing a critical role in helping the ordinary person understand politics and make informed decisions," said Ngwenya.
Voluntary Media Council of Zimbabwe (VMCZ) executive director and newly-elected secretary general of World Associations of Press Councils (WAPC), Loughty Dube said he was impressed that TellZim News is operating ethically.
"The newspaper has been professional since its formation and has been publishing incisive and thoroughly researched stories. It comes as no surprise that there have been no complaints against the paper," Dube said.
The newspaper has also been hailed for its commitment to education, with renowned academic and Reformed Church University (RCU) Vice Chancellor, Professor Wiseman Magwa saying it was remarkable that the newspaper devoted space to education.
"I like the education page that is frequently carried by the newspaper. It is quite educative and the paper is playing a wonderful role of promoting education in our communities," said Prof Magwa.
These sentiments were echoed by Ndarama High School head, Shirley Makausi who said it was encouraging that TellZim News was showing a commitment to education.
"There is no greater gift we can give to our children than an opportunity to get an education. It is good therefore, that TellZim News has availed itself as a partner in our quest to improve education.
"I am excited that children at Ndarama are looking for the newspaper all the time and are finding it useful in their school work," said Makausi.
City of Masvingo Mayor, Hubert Fidze said TellZim News had introduced a new approach of highlighting service delivery shortfalls without unnecessarily antagonising authority.
"We have come to learn of the many areas that need attention through the work of the newspaper. We encourage the kind of journalism we are seeing at TellZim News. As leaders, we must not be exempted from criticism, but it has to be fair and constructive, not just criticising for the sake of it," said Fidze.
The newspaper also occasionally dedicates space to local investment opportunities as a way of promoting the development of the local economy and the growth of local businesses.
"We are happy that TellZim News is promoting local businesses for the growth of our economy so that more people can find work," said Noah Marima, who is the director of Junior Driving School and Junior Microfinance.
Media Alliance of Zimbabwe (MAZ) Programmes Manager, Nigel Nyamutumbu said the newspaper had exceeded expectations and was touching on issues affecting the whole country.
"The newspaper is doing very well on coverage of critical issues affecting the whole country. The stories we see there are relevant to circumstances we see elsewhere," Nyamutumbu said.
Newspaper vendors said TellZim News has become very popular with the readers.
"TellZim News is the most sought after newspaper at my stand every Thursday morning," said Nickson Kwirirai who sells newspapers at Belmont Press in Masvingo town.
TellZim News was launched on November 4, 2015 and its niche is centred on community development reporting, service delivery, promotion of human rights and good governance.
The paper's editor Passmore Kuzipa said their major aim is to amplify marginalised voices in developmental issues.
"We believe information is key to development; when people have access to information they make decisions from an informed point of view. We are giving voice to marginalised communities and we are also lobbying public office bearers to account for their actions. We have sections which accommodate different classes like the Education section, Investment page, Church news, Entertainment and Sports.
"I want to thank the whole community, business people and ardent TellZim News readers for the overwhelming support over the past year. I want to assure them that 2017 will be bigger and better in as far as community development reporting is concerned. We are coming up with new innovative ideas that will promote access to information and development of our country," said Kuzipa.news
Share !