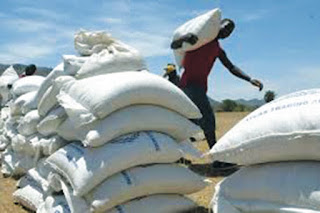 GUTU – Villagers of ward 21 under Chief Munyaradzi have complained that their councillor, Jervas Mutizwa is using national identification cards belonging to vulnerable people to give food aid to people affiliated to Zanu PF, TellZim News has learnt.
A person who claimed to be a victim of the scam complained that Mutizwa fraudulently used his ID number to corruptly put his supporters on the list of social welfare food aid recipients.
"I am one of the people who discovered that my ID number was being used by the councillor to give food to members of his political party and those that go to his rallies.  I'm disabled so I am not able to attend their rallies but it seems I am being punished for that.
"I am the only one who got the courage to speak because others are fearful. I hope to see justice being done in the distribution of food aid," said the victim.
Mutizwa, however, denied the allegations saying they were lies fabricated to harm his persona.
"What I can tell you is that there was an error which took place at one of our food aid distribution exercise when an ID belonging to a person called Lawrence Murawu was mistakenly used to give food to another person. That is probably what people are using against me," Mutizwa said.news
Share !