Has the police become agents of road carnage? 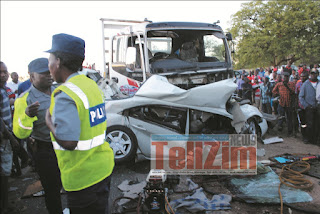 Is our police now agents of the ever increasing accidents in our roads and should they be held accountable for the countless innocent lives lost as a result of road carnage?
It boggles the mind that public service vehicles like kombis are fined for having worn-out tyres, no handbrake, one headlamp, no driver's license and for speeding before being allowed to proceed, and then they get involved in an accident soon after.
Wouldn't it proper for the police to fine the kombis and then accompany them to the Vehicle Inspection Depot (VID) for fitness test and see to it that all public service vehicles have fitness certificates?
Of late, our police prioritise meeting the set cash target, which, according to police sources, is normally between US$1 000 to US$2 000 per roadblock per day.
They don't mind fining the same vehicle for the same offense even for the whole year as long as they get the money to meet their target.
Why would traffic police officers given daily cash targets in the first place if this is not fundraising? The traffic police is no longer concerned about the gravity of the offense committed as long as one pays the fine. Imagine a person driving without a driver's license is fined and allowed to go while driving a public service vehicle?
In Masvingo, roadblocks are now a permanent feature in any of the roads that connect to the Central Business District (CBD), including informal ones known as 'Bhinya roads'.  The funny thing is that not any of these vehicles have been taken to VID for fitness test by the police because the law enforcers seem to enjoy fining these kombis and taxis on daily basis over the same offenses so that they can knock off with the required amounts.
Masvingo Taxis Association chairperson David Masomere has condemned police for not decisively dealing with unregistered taxis (Zvipipipi) that have become an eyesore in the CBD. Masomere also says the cat and mouse battles between the police and unregistered taxis have caused many accidents and deaths.
"There are a lot of unregistered taxis that are operating at Pick n Pay there and many of them park dangerously but the police do nothing about it. These cars pay $10 fine every day and that ticket would allow them to ply any route for the whole day. Just last week, one of our taxis was hit by an unregistered taxi which was being chased by the police and innocent passengers were injured," said Masomere.
"Imagine we pay around $700 to get properly registered but someone just pay $160 to have the yellow plates and start ferry passengers. The police do not care much about this as long as those vehicles pay fine. However, a lot of accidents have been caused as a result of these unroadworthy and unregistered taxis.  We however, respect and value life so we are going to engage the police so that all public service vehicles have fitness certificates from VID especially this festive season," he said.
Chifamba, who survived an accident which killed others, said police should know that paying fines does not make an unroadworthy vehicle roadworthy, but it has to be repaired and then go to VID for inspection.
"Our police are forgetting one thing; there tickets are not a remedy to vehicle defects that should go to the VID for inspection before given a fitness certificate. If properly implemented, the process would ensure that our vehicles are roadworthy. The police no longer enforce other laws as long as the motorist pays a fine or a bribe. The fines are not even deterrent enough; in fact our police are fundraising through these roadblocks," said Chifamba.
When contacted for comment on why police allow vehicles with faults to operate every day, Masvingo provincial police  Press team, as expected, professed ignorance over the matter.
While accidents are also caused by poor roads and human error, the police are also contributing significantly through their 'fundraising' roadblocks.
Three months ago, the Masvingo United Residents and Ratepayers Alliance (MURRA) demonstrated against the police demanding a reduction in the number of roadblocks in our roads.
MURRA director Anoziva Mugutu said then, "We want the number of police roadblocks to be reduced with immediate effect because they are not serving any purposes except for fundraising."
Minister of Home Affairs Ignatius Chombo, however, has been very defensive of the police saying there not delving in any corrupt activities insisting that members of the public should come forward with evidence.
Though Chombo tried to be smart about police corruption; there are a number of officers who have been either fired or dragged to hearing over corruption here in Masvingo.  The police has bought new fleet of Ford Rangers and Ford vehicles from the money they realise from roadblocks.
It is however, high time the police start to value human life and stop prioritizing money at the expense of people on our roads.news
Share !