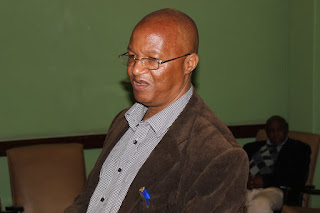 'I think service delivery all the time'

MASVINGO – City of Masvingo Town Clerk, Adolf Gusha is now regarded as one of the finest managers in the country after he scooped the prestigious Best CEO of the Year award (Second Runner-up) at the Megafest Business Awards in Bulawayo on October 28, 2016.
Gusha was nominated in the category alongside top CEOs in the southern region and was the only public sector nominee in a category dominated by corporate private players.
Gusha said he felt honoured to be ranked among top CEOs in the country.
"I feel honoured to receive the award; an achievement which came in light of my long service in local governance. I have hardworking people with a cordial working relationship which is critical for service delivery," said Gusha.
Gusha thanked councillors and the people they represent whom he credited for making a contribution through rate payments.
Gusha said he is motivated to see the city of Masvingo growing.
"I have passion for governance issues and I have been working for local government all my life. I would however, want to thank people like Mr Tsunga Mhangami and Munyaradzi Vhudzijena who mentored me to be who I am today.
"My management is very competent and they are development oriented. I am happy that we always talk of innovative solutions. We have a rare crop of manager who think outside the box all the time," said Gusha.
The Town Clerk took the opportunity to thank the Minister of State for Masvingo Provincial Affairs Shuvai Mahofa for supporting the municipality.
"Minister Mahofa is very supportive, she loves this city and I am happy that she is someone who is always there for us," added Gusha.
He said the award symbolised better things to come and will put Masvingo on the business map, leading to improved investor confidence.
"We are running up and down so that the people get quality services. I think quality service all the time," added Gusha.
City of Masvingo Mayor, Hubert Fidze said the award was a source of pride for the city.
"I feel honoured to be working with people who are dedicated to the development of our city. The award testifies to the spirit of commitment and hard work that we share.
"We put politics aside and work together as a team so that we deliver what we are expected of as council," said Fidze.
Gusha has been in local governance since 1983 when he joined the Shurugwi Rural District Council after completing his university education the previous year.
He later joined the local governance ministry before moving to Masvingo city council in 1987 where he started as the deputy housing director. He then rose through the ranks until he was appointed substantive Town Clerk in 2004.news
Share !