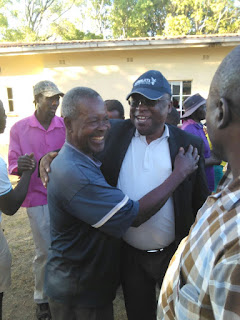 MASVINGO – Masvingo Urban legislator Daniel Shumba last week criticised 'greedy' politicians who like to cease productive land from companies and individuals, saying people should work for themselves rather than try to thrive on stolen property.
Shumba was speaking at a feedback meeting with Zanu PF members and supporters at Chiefs Hall in Mucheke.
His sentiments come at the backdrop of increased fears that party bigwigs, including provincial affairs minister, Shuvai Mahofa, want to cease more land from sugar giant, Tongaat Hullet.
"We want to see people working their own land to make it productive rather than seeking to grab land that has been made productive by others. If you are a genuine farmer, you must be able to grow your own crops and not cease others' productive land," Shumba said.
He cast himself as a model politician who never loot resources or thrive on ceased property, saying he never snatched land from anybody.
"I worked for all that I have and my profile does not include anything to do with land ceased from others.
"The government has been infiltrated by corruption but it's not only Zanu PF members who are involved in corruption. I urge all of you to shun every form of corruption and work hard for yourselves," he said.
On the critical water situation in the country, Shumba said he had acquired boreholes that will be installed in all wards of Masvingo to help alleviate the shortages.news
Share !