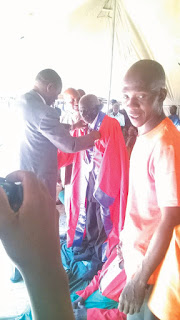 NYAJENA - Masvingo businessman, Martin Lucas Mushanyuki says he feels cheated after the installation ceremony for the new Chief Nyajena, Dzingai Zengeya, finally took place on October 28, more than three years after he was appointed by President Robert Mugabe.
Minister of Rural Development, Promotion and Preservation of National Culture and Heritage, Abedinigo Ncube, was the Guest of Honour at the installation ceremony,
Zengeya, of the Mateveke clan, was born on October 21, 1921, and was appointed by President Mugabe on May 20, 2013 but the installation ceremony could not take place because his appointment was being challenged in the High Court by Willie Ngundu of the Maburutse clan.
However, Mushanyuki, who has also been contesting the chieftainship for several years, argues that it is the Mushanyuki clan's turn to take the throne.
"I feel that I have been shortchanged yet again because I personally approached the High Court a number of times before Zengeya was chosen to be the next chief.
"I did not follow up on the matter the last time because I fell sick. However, I maintain that I should have been installed instead because, in my view, Zengeya is not eligible for the chieftaincy. I have evidence to prove that," Mushanyuki said.
During the ceremony, Ncube urged the new chief to carry out his duties diligently to ensure the proper exploitation of land and its natural resources.
The installation ceremony was also attended by senior civil servants, Masvingo District Administrator, Makepeace Muzenda and management personnel from RioZim's Renco Mine.news
Share !