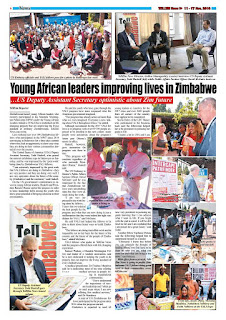 Zimbabwean-based young African leaders who recently participated in the Mandela Washington Fellowship (MFW) under the Young African Leaders Initiative (YALI) have embarked on life changing projects that are improving the living standard of ordinary Zimbabweans, TellZim News can reveal.
Last weekend saw over 100 Zimbabwean fellows who participated in the MWF since 2014 converging in Bulawayo for a three days summit where they had an opportunity to show case what they are doing in their various communities dotted all over the country.
The United States of America (USA) Deputy Assistant Secretary, Todd Haskell, who graced the summit exhibition expo in Bulawayo on Saturday, said he was impressed by the 'great work' being done by Zimbabwean YALI fellows.
"I am extremely impressed by the great work that YALI fellows are doing in Zimbabwe - they are very positive and they are doing very well. I am very optimistic about the future of the country (Zimbabwe) and the continent," said Haskell.
On the US government's commitment to invest in young African leaders, Haskell said President Barack Obama started the program in order to hone leadership skills among the youth who show great potential of bringing solutions to their communities.
He said the youth who have gone through the YALI program have since surpassed what the American government imagined.
"The program has already achieved more than what we even imagined. Everyone is now talking about YALI throughout Africa," he added.
Although recruitment for the 2017 YALI fellows is in progress with over 69 000 people expected to be enrolled in the next cohort, many people were pessimistic about the program's future post Obama's tenure in office.
Haskell, however, gave assurances the program was there to stay.
"This program will continue regardless of who succeeds President Obama," Haskell said.
The US Embassy in Harare's Public Affairs Section Officer, David McGuire said he was impressed by the fact that Zimbabwean fellows were not pitching ideas but they were already doing the work.
"I am very impressed by the work being done by fellows.…I knew that we selected the best people for the program and what they are now doing is just a reaffirmation that they were indeed the right candidates for YALI," said McGuire.
He said YALI had helped the fellows to be able to think about better ways to build Zimbabwe.
"The fellows are doing incredible work and its impossible not to feel hope for the future of the country and the future of the people of Zimbabwe," added McGuire.
YALI fellows who spoke to TellZim News said the program offered them with life changing experience.
Samuel Wadzai, a Mandela Washington Fellow and leader of a vendors association, said he is now dedicated to helping the youth to do projects that can improve the living standard of every Zimbabwean.
A medical practitioner, Dr Freebee Murahwa said he is dedicating most of his time offering free medical services to people living in marginalized communities.
"I have understood the importance of servant leadership and I often go to rural areas where I am now offering free medical services," said Dr Murahwa.
A total of 120 Zimbabwean fellows participated in the program since 2014 when the program started.
Zimbabwe is expected to send 60 young leaders to America for the 2017 class and over 2400 people from all corners of the country have applied to be considered.
Sicelo Dube of the LEC Biotec who participated in the business track said the fellowship helped her to be persistent in pursuing her goals in life.
"I learnt a lot in USA and I am now very persistent in pursuing my goals knowing that I can achieve what I want in life. If you begin with the end in mind, it will be difficult to fail and I am confident that I am poised for a great future," said Dube.
Another fellow Tapfuma Mutasa said the fellowship helped him to understand himself as a leader.
"Ultimately I learnt that before you can entertain the thought of leading others, you first have to be clear on who you are, what you stand for and what you bring to the table," said Mutasa.
With effect from next week, TellZim News is going to profile Zimbabwean YALI fellows doing great work in their communities. www.tellzim.com