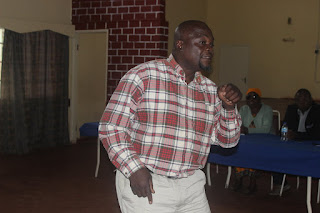 MASVINGO – Is Zanu PF plotting to wage political violence in the Bikita West by-election? The recent utterances by Zanu PF Masvingo provincial chair Amasa Nhenjana (pictured) that he was given orders from above, which he could not specify, boggles the mind especially considering that Bikita experienced worst form of political violence with gory murders during 2002 by-election and in the run-up to the 2008 presidential run-off elections.
Addressing party members at Chiefs Hall in Mucheke over the weekend, Nhenjana said they will leave nothing to chance in Bikita West especially after they were humiliated in Norton by-election recently where the ruling party lost heavily to an independent candidate, Themba Mliswa.
"We were told straight from high office that the Bikita West seat must be retained and we have to retain it. We have to use any means possible because we cannot afford to lose the seat. We have to mobilise as many people so as to achieve that and we don't want a repeat of what happened in Norton.
"I am also giving an order today that I want to see all of you in Bikita. When the time comes, will organise transport that will take you from Masvingo to Bikita so that you play your part in the by-election," said Nhenjana without elaborating.
Though the election date has not yet been set, many people expect a hard fought battle with indications that former Zanu PF youth boss Kudakwashe Gopo who is now with the Zimbabwe People First might be one of the candidates to contest against Zanu PF's Beauty Chabaya.
The party, despite mounting a spirited and sometimes violent campaign, was recently stunned in Norton when its candidate, Ronald Chindedza, was defeated by Mliswa.
The party now faces an uphill task retaining Bikita West with some Zanu PF members unhappy with the party's  Chabaya, whom they say was very weak.
Chabaya controversially won the right to represent Zanu PF in the by-election ahead of her closest rival Elias Musakwa through a primary election that many dismissed as rigged.
Nhenjana said the Bikita West by-election will be polling station-based; enumeration will be done at the station and the outcomes of each polling station announced from there.
He urged party supporters to be united and work together till election day saying factionalism had to be defeated so that the party can win.
"We urge all the people to work together till election day so that we win the election. We can only win this constituency if we are united," Nhenjana said.
One of the Zanu PF supporters openly told Nhenjana that there were high chances of losing in Bikita since there were a lot of things frustrating party supporters in Bikita West.
The Bikita West seat fell vacant after Munyaradzi Kereke was slapped with a 10-year jail term after being convicted of raping his niece at gunpoint.
The Chiefs Hall gathering was attended by Masvingo Urban legislator Daniel Shumba and other provincial committee members of the party.news