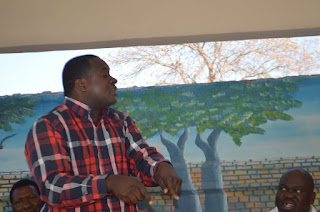 CHIVI - Philanthropist and Chairperson of the Chivi Rural District Council, Killer Zivhu has honoured all schools that scooped titles in the 2016 sporting season in the district.
Zivhu rewarded the pupils with grocery hampers and five Dell desktop computers per school.
Chibi High School was rewarded for their record fifth time win in the girls volleyball category of the National Association of School Heads (NASH) competitions.
Danhamombe High School was also honoured for winning the handball championship for the fifth time in a roll.
Paradza Primary School was recognised for holding onto the netball title for the past four years with Chidyamakono High School was honoured for winning the girls soccer trophy four times in the Copa Coca Cola tournament.
Madyangove got its share of honours as champions of the NASH debate competitions.
Psychomotor minister, Josaya Hungwe, who was guest of honor at the event, encouraged schools to work hard.
"I heard that all you won and I was glad. I then went on to look into curriculum vitae of sportsmen like Neymar. I was surprised to see that his occupation was sport with a salary making him millions of dollars. It was until then that I realised that sport is not just for fun. Let's take a lead as Chivi to show the nation that sport is a noble," he said.
Speaking at the same event, Zivhu emphasised the importance of sport in the economy.
"Success does not only begin in class but in sports as well. I was motivated to do something for these pupils on recognition that they managed to beat well-resourced schools from cities.
"The hampers have been provided by the First Lady Grace Mugabe after I told her about these schools. I only added computers as a token because I am of the belief that the biggest investment one can make is that of investing in human resources. That way, your legacy will forever live," Zivhu said.
NASH Chairperson for Masvingo; Austin Hakunavanhu thanked Zivhu for his efforts to motivate local school children.
"This makes our children confident in everything they do because they feel their efforts do not go unnoticed and that encourages them to do better. This event is also important because it brings us all together as a united society," Hakunavanhu said.
Also present at the event was businessman, Clever Pote, Chivi Rural District Council Chief Executive Officer (CEO), Tariro Matavire, Chivi District Schools Inspector, Isaac Gwamuri, headmasters and coaching staff from the winning schools.news
Share !