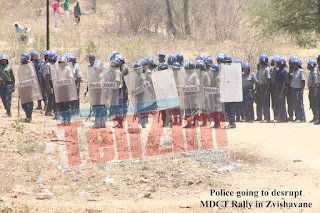 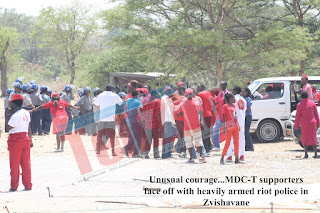 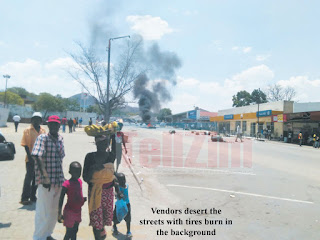 Zvishavane turned into a war zone on Sunday afternoon as Movement for Democratic Change (MDC-T) supporters went on rampage burning tyres in the streets protesting against police cruelty after their rally was dismissed by armed police officers.
The police claimed that the rally was going to be a security threat since Midlands State University (MSU) Zvishavane campus students were preparing for their exams that will commence on Monday November 7, 2016.
According to MDC-T deputy organising secretary, Moses Chibaya, the police demolished their tent despite the fact that the courts had granted permission for the party to go ahead with the rally.
"We were expecting our Vice President Nelson Chamisa to address a rally but armed police descended on us, dispersing everyone from the rally. They destroyed our tent despite the fact that the courts granted us permission to go ahead with the rally.
"The people were angered by the move and they went onto the streets to demonstrate against police's barbaric behaviour," said Chibaya.
OK supermarket and other shops immediately closed after the demonstration turned violent as the police resorted to use tear gas in a bid to disperse the angry masses.
However, at some point, the police failed to control the people and angry MDC supporters chased the police from the main street up to their camp along Masvingo highway – about 900 meters away from the CBD.
TellZim News could not ascertain the actual number of people who were arrested so far.
More to follow….
Share !