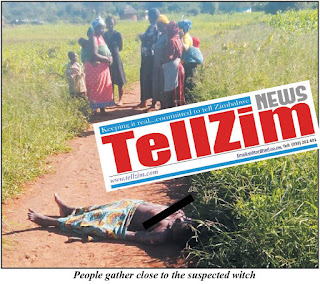 26 Jan 2017 - GUTU - A suspected witch reportedly fell from a winnowing basket (rusero) in Gutu last week leaving villagers baffled as to how she could have traversed the distance from her home more than 30 kilometres away.
The suspected witch was identified as Success Zharare from Zharare Village under Chief Nyamandi.
She reportedly fell from the winnowing basket in Nyota Village near Rasa Mountain but her home is close to Gutu Mission Hospital.
Eyewitnesses who declined to be named told TellZim News that Zharare was discovered in a maize field close to midday by people who were weeding in the field.
"One of them decided to relieve herself and was shocked to see a stark naked woman lying in a bush close to a busy path. She immediately alerted others of her discovery and Zharare was pulled onto the road.
"At first she pretended to be in some kind of trance and did not respond to questions but later opened up and revealed her identity and where she had come from.
"One of the women who were present felt bad seeing naked Zharare lying on the ground and offered her a cloth to cover her nakedness," said the eyewitnesses.
They added that Zharare told the people who had gathered that she had traveled in the winnowing basket with two others who managed to make the journey home.
"She said their destination was a Zion Christian Church (ZCC) pastor's home in the area and she failed to see clearly through the mist. She added that every time they approached the home she saw a pool of water," they said.
TellZim News could not establish what happened to Zharare after she was released by the villagers.news
Share !