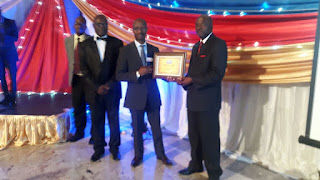 09 Feb 2017 - The City of Masvingo has added yet another accolade onto their stand by winning the 2016 Best Urban Local Authority in Zimbabwe award during the public sector awards function held in Harare last week.
The awards were sponsored by Stallon Consultancy.
The award given to Masvingo serves as recognition of council as the best-run urban local authority.
Though faced with many challenges, the city council strives to provide optimum services for residents.
Mayor Hubert Fidze said council dedicates the award to the residents and council employees.
"We have been building on our past success story when we won other awards like the Best Communicator as well as the Best Chief Executive Officer (CEO) won by TC Adolf Gusha. We have our residents to thank because they pay the rates for us to perform our duties," Fidze said.
He also thanked councillors and management for putting politics aside for the public good.
"When it comes to council business, I am proud of our councillors because they put politics aside and focus on service delivery. We are not operating at our 100 percent but we are trying. We are still struggling to pay salaries and we hope things will be alright. We prioritise service delivery over salaries," said Fidze.news
Share !