Over 50 Sochamps trained in Zaka 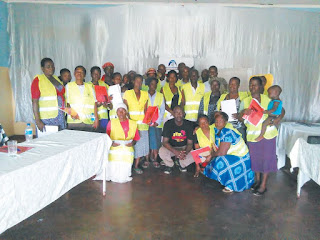 02 Feb 2017 - ZAKA - More than fifty Socio-Economic Champions (SOCHAMPS) in Zaka last week received training under the Vendors Initiative Social and Economic Transformation (VISET) at Jerera growth point.
This was done as a Trainer of Trainers (TOT) workshop conducted on constitutional rights, transparency, accountability, awareness and advocacy.
The training was part of VISET's Vendors Action for Constitutional Reform (VACRE) Project which was launched in September 2016 with the goal of achieving strategic mobilisation of the informal sector.
It was also aimed at building capacity to demand constitutionalism by public officials.
Seventy-seven people (41 females, 11 males and 25 youth) were trained on the right of street vendors to enhance their ability to trade freely, create a favourable and legislative framework which facilitates access to finance and profitable markets.
Founder and Executive Director of VISET, Samuel Wadzai Mangoma raised concerns about the callous illtreatment of vendors by the police and other arms of government.
"I am troubled that vendors are not recognised as enterpreneurs. They are often  illtreated and harassed like criminals," Mangoma said.
Mangoma said VISET was doing its best to bring solutions to avoid the harassment of vendors.
"VISET wants a total removal of obstacles that inhibit street vendors from trading freely and profitably," Mangoma said.
The trained SOCHAMPS are expected to take their knowledge to other places in Zaka in which VISET will be on the ground to assist all SOCHAMPS.
Among other respected figures who attended the event was Councillor Peter Imbayarwo from Zaka Rural District Council.news
Share !