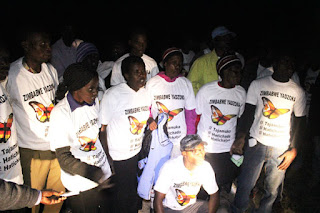 02 Feb 2017 - ZAKA - Zimbabwe Yadzoka, a pressure group working to mobilise a coalition of political parties to restore democratic rule in the country, last week launched the Nhimbe system, a mass mobilisation strategy, in Jerera.
Among the delegates were the national coordinator, Itai Madataire, vice chairperson Menty Makurumidze and provincial chairperson Wellington Chakona.
Zimbabwe Yadzoka is a non-political organisation advocating for a coalition to defeat Zanu PF.
Madataire said the group supports the case for a single opposition presidential candidate to wrestle power from Zanu PF.
He encouraged everybody to target the millennials and young people as they are a critical voting bloc.
"I discovered that people in Jerera now need change and are supportive of the idea of the grant coalition with no pre-conditions," Madataire said.
Coordinator of the campaign, Victor Chimhutu also emphasised the need for all opposition parties to unite behind one candidate.
"I think you may agree that our common problem as Zimbabweans is Zanu PF and if we do not get united, we will split our vote and Mugabe will win again in 2018," Chimhutu said.
On the same note, Makurumidze said people should be mobilised so that their goals can be achieved.
"What is needed now is enlarge the mobilising team so that the goal can be achieved," said Makurumidze.
Another member of the pressure group, Lainos Gwanangudza said he was impressed by the new Nhimbe strategy which he said would break new ground in mobilisation.news
Share !