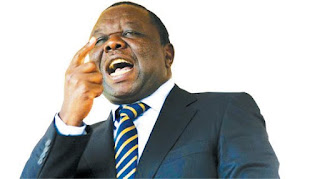 09 April 2017, MASVINGO - The Movement for Democratic Change (MDC-T) could suffer the same fate that Zanu PF suffered in 2008 when some party members and supporters mounted a protest vote in response to the imposition of party candidates, TellZim News has learnt.
The MDC-T has released a 'primaries template' which gives senior party officials a smooth sail by barring juniors from contesting them in primary elections but the idea has been vehemently opposed by the grassroots which alleges a 'Zanufication' of the opposition party.
"We are a democratic party and we must act accordingly. How can they say senior officials will go unchallenged? What is the difference then between us and Zanu PF which is known for imposing candidates?" said one supporter.
Other active members and supporters also threatened to vote for Zanu PF or not vote at all should the template be adopted.
"Let the voice of the masses be heard. People have to prove themselves in the primaries regardless of the post they hold in the party or else we will all go along with Zanu PF.
"The decision by the National Council will destroy the party. Panoita voter apathy. We have suffered severely at the hands of Zanu PF so it's surprising that we have our own leaders trying to undermine the very democracy we are fighting for by using a pen and paper to write whatever nonsense they want and hand it to their secretaries. What a nerve. Shame on their greed!" one irate member said.
Another party member said senior officials, if they are really worthy their salt, have nothing to fear from being competed by juniors.
"Democracy should start internally and not when we are in government. The candidate selection process should be open for everyone to participate. If they are really senior, why are they afraid of competition? I thought they had learnt something from the 2013 Tsunga - Mutsekwa debacle in Mutare but they have not. We don't want that template," said the party member.
In Masvingo the template would benefit the likes of Takanayi Mureri who faces a strong challenge from Bonface Mazarire in his bid to represent the party in Masvingo Urban.
When contacted for comment MDC-T national spokesperson Obert Gutu tried to rubbish the existence of the maligned template saying it was just speculative talk.
"I will not dignify speculative talk because that is what it is. I will not discuss the issue because it will cause unnecessary commotion. There is no template yet and the responsible authorities are still debating the provisions. All our structures will be notified accordingly once a template is out," said Gutu.politics