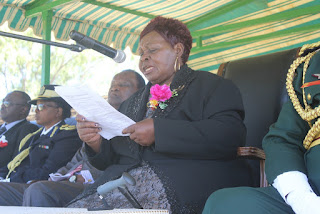 CHIREDZI - The Minister of Rural Development, Promotion and Preservation of National Culture and Heritage Abedinigo Ncube has praised the Chiredzi Rural District Council (RDC) for working to develop communities.
He said this during the commissioning of machinery and road equipment at a ceremony held at council offices on last week.
The machinery was procured by Chiredzi RDC for the purposes of maintaining infrastructure and improving service delivery.
Ncube, who was also the guest of honour at the occasion, said the RDC was a good example of a well-run council which other local authorities should emulate.
"Today's ceremony is reflective of the hard work done by the council towards improving the lives of the people of Chiredzi and all other local authorities should borrow a leaf from this," said Ncube.
He applauded the council for fulfilling its mission statement which is centred on building community livelihoods and improving standards of living in a sustainable manner as well as fostering a sense of partnership in all sectors of the district's economy.
He said Chiredzi RDC was playing a fundamental role to fulfil of government's National Development Agenda as guided by the ZimAsset blueprint.
"I am happy that Chiredzi Rural District Council has fully embraced the challenge of ZimAsset by embarking on deliberate programmes to improve the road network, education and the general welfare of the community through this initiative," Ncube said.
Minister of State for Masvingo Provincial Affairs Shuvai Mahofa echoed the same sentiments saying the RDC exemplified unity.
"Chiredzi Rural District Council is a united council and we are proud that we are here today celebrating your success story," said Mahofa.
Council Chief Executive Officer (CEO) Isaac Matsilele gave credit to Public Private Partnerships for the success of the initiative.
Chiredzi RDC now owns a dozer, two graders, front-end loader, UD80 lorry, two tractors, a tipper, and axle dumpers among other service vehicles.local
Share !