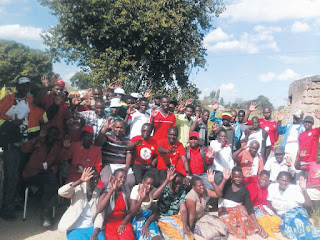 GWERU - The Morgan Tsvangirai-led Movement for Democratic Change party (MDC-T) has launched their 'Bereka mwana' campaign in Midlands, encouraging parents to make sure their children register to vote.
MDC-T Midlands provincial party spokesperson Munyaradzi Mutandavari said the move will be a major boost ahead of the highly anticipated 2018 elections.
"The MDC-T has never campaigned as it is doing right now. Women from the party have embarked on Mhou nemhuru yayo campaign and now the youth league is doing the Bereka mwana campaign.
"All these campaigns are a major boost ahead of next year elections," Mutandavari said.
On Saturday last week, the campaign was taken to Shurugwi South, a purely rural constituency where there was massive attendance.
"Youths in the areas we visited have shown that they are eagerly waiting to deliver change. They understand that they make up a great percentage of the suffering Zimbabweans and have, for the past years, done nothing to lift our beloved country out of this economic quagmire because of lack of education. They now seem to be well geared to deliver change after this campaign," said Mutandavari.
The campaign launch was also attended by national executive members as well as the Midlands provincial executive.local
Share !