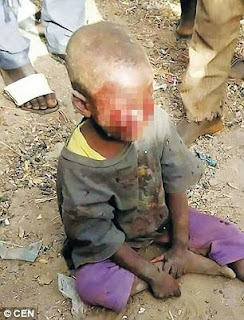 MASVINGO - Police have dismissed the story which circulated on social media some weeks ago alleging that a step-mother from an unnamed rural area in Masvingo had plucked out her stepson's eyes as punishment for bedwetting.
The story initially did rounds on WhatsApp claiming that a step-mother from Nigeria had gouged her step-son's eyes for the 'offence' of bedwetting but a modified version of the story soon emerged, claiming that the horrific deed had happened in Zimbabwe.
The modified version claimed that it had all happened in some rural outpost in the province of Masvingo.
Journalists from respectable Western media houses including The Mirror UK and The Dail Mail UK soon fell for the story and splashed it on their pages without doing the necessary verification work.
"Stepmother GOUGES out the eyes of her four-year-old stepson in Zimbabwe because he wet the bed", boldly reads the headline of a version of the story as published by the UK Daily Mail on March 17, 2017.
"An evil stepmother allegedly gouged out the eyes of her four-year-old stepson as a barbaric punishment after he wet the bed," the story is introduced.
Provincial police assistant spokesperson, Assistant Inspector Kudakwashe Dhewa has however dismissed the story as false, saying nothing of that sort had been reported.
"When I heard about the story, I made some enquiries and found out that it was not true. It did not happen in Masvingo and even in Zimbabwe, maybe it is another country not Zimbabwe," said Assistant Inspector Dhewa.
The Daily Mail story, accompanied by a gruesome image of the said victim, however still appears on the publication's website, claiming that "The horrific attack happened in the province of Masvingo, Central Zimbabwe" and "It is claimed the woman has admitted the crime and was laughing about carrying out the evil deed when police arrived. Local reports claim the woman was saying: 'He isn't my child' to officers who questioned her motives."
Digital rights advocate, Natasha Musonza said it was depressing that even what used to be regarded as credible news organisations were now falling for the fake news trap.

"I find it really strange that such big newspapers cannot quote really credible sources and they talk of Masvingo province as if it's a building somewhere. Surely if they could get their hands on such a graphic image, the person who sent it should have also provided specific location detail..?
"I am afraid that in the quest to be first with 'breaking news', newspapers no longer exercise due diligence and often just end up drowning in potentially dangerous obsessions. In this era of fake news, anything is possible especially with advances in technology and Photoshop.
⁠⁠⁠⁠
"It's unfortunate that the benefits of social media sometimes get swallowed in people's obsession to share viral graphic images," Musonza said.
She also lamented the stereotypes that malicious news vest on Africa and its people.
"Furthermore, unverified stories like this being propagated by big media do nothing to expunge the narrative of Africa being this dark and barbaric continent," Musonza said.

Media analyst Ernest Mudzengi said it was important that all news story get verified before they are published.
"There is need for thorough verification before publishing. Those who published the story should have verified the story first," said Mudzengi.local