Alleged witch turns out to be mental health sufferer 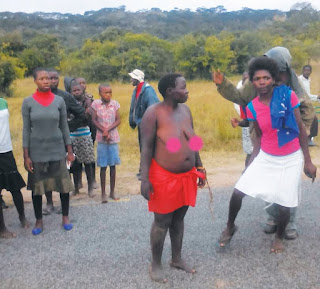 ZVISHAVANE – A Zvishavane woman who emerged naked during the day in Mapanzure and was labelled a 'witch' by locals has turned out to be an innocent woman suffering mental health problems.
Confirming the development to TellZim News, Chief Mapanzure said after assessing the lady's condition, he recognised that she was mentally challenged.
"People were just quick to think and label that lady a witch because she was naked but she just has a mental illness. The woman dumped by a motorist on the roadside after she indicated that she was travelling to Masvingo, a direction which was totally opposite to where the motorist was driving to.
"I was also told she had been seen the previous day looking for warm clothes and food, something uncharacteristic of our understanding of witches. A witch never opens up and never wants to be known when he or she arrives in an area," Chief Mapanzure said.
The Chief also said the lady was simply labelled a witch in accordance to local beliefs that link nakedness in broad day light to witchcraft. He also highlighted that the police just instructed locals to find a way to have the lady taken back to her home saying they had no transport.
"We tried helping the lady but she tore up all clothes we gave her. Some even identified her as a Zvishavane local who even has a family but no one was willing to help her because of her condition. I am however informed that she is now back in Zvishavane and is in better shape," said Chief Mapanzure.local
Share !