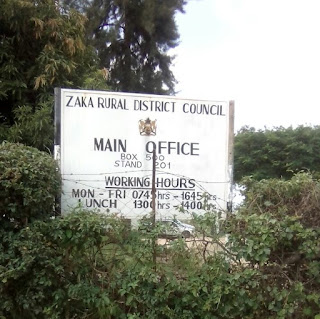 ZAKA – Reigning Chief Ndanga, Wilson Makono has reportedly ordered the destruction of illegal houses being built around Jerera, telling village heads to stop selling land earmarked for the expansion of Jerera growth point.
Though Chief Ndanga could not be reached for comment by the time of going to print, ward 19 councillor Peter Imbayarwo said the chief had made it clear at a stakeholders meeting that it was illegal for village heads to sale land.
"We held a meeting with the village heads and the chief told them that there was no provision in the traditional leadership act which allows them to sell land to people," said Imbayarwo
Chief Ndanga is also said to have accused village heads of being land barons who were allowing the mushrooming of illegal structures around Jerera before ordering headman Gonese to compile a list of all stand holders in the area for submission to him.
Zaka Rural District Council (RDC) has struggled to stem the expansion of such villages as Musiso, Benjamin, Manyimo, Mateko and Gwanya from expanding onto land that has been earmarked for the expansion of Jerera.
Benjamin village head aide, Tendai Benjamin had earlier told TellZim news that the RDC had no right to stop village heads from giving land to people for 'they were the owners of the land'.
"Ndiyani wakatanga kuvapo sabhuku nekanzuru? It's the village head so council cannot stop me from exercising my power," Benjamin said.
In the stakeholders meeting, all village heads and other representatives like Benjamin are, however, said to have shown no opposition to the chief's stance.
District Administrator (DA) Victor Zinanga, who also attended the meeting, is said to have supported the chief, telling village haeds to move with speed and ensure that the unregularly built structures are destroyed.
The illegal settlements emerged when the council surveyed land in the surrounding villages and put it under the Jerera expansion plan before village heads allegedly started selling stands from US$200 to US$400.local
Share !