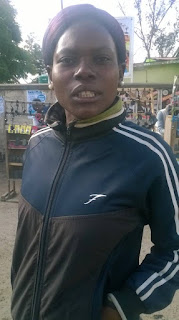 CHIVHU - Two cousin sisters who reside in J Extension, are engaged in a bitter feud over a boyfriend allegedly snatched by the elder sister.
Ethel and Moilah Munatsi are potato vendors who usually do their business around Chivhu post office but left work and exchanged blows at Spar in the presence of the said boyfriend last week, only to be restrained by members of the public.
The Munatsi sisters are said to have fought again later at home and were also said to have parted ways in their potato business.
Ethel told TellZim News her younger sister was at fault claiming she was the one who assaulted her first after finding out about the love triangle.
"I had to teach her a lesson, how could she beat me instead of us coming together as sisters and fight our common enemy. I will date that guy till she knows how to deal with matters and the boyfriend is mine even though he used to be hers," boasted the big sister
She went on to brag about snatching the boyfriend, saying she was the better one of the two.
Moilah, however, insisted she will get her boyfriend back using whatever means necessary.
"She is a prostitute. How could she snatch my guy, a sister for that matter? I will deal with her accordingly and will not let her take him away," said Moilah.local
Share !