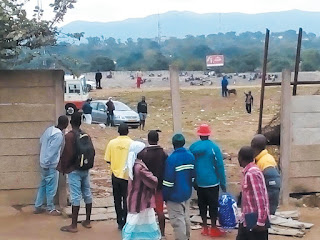 People walk through a damaged part of Sakubva Stadium

MUTARE - President Robert Mugabe's recent visit to Mutare has left the city council with a huge bill to pay for repairs on Sakubva Stadium which suffered substantial damage as people stampeded to gain entry for the free entertainment galore provided.
The stadium's security was broken on one side as people jostled to see Soul Jah Love performing and it has since enabled people to walk freely into the stadium without using the regular entry points.
Council-sponsored football team, Mutare City Rovers recently lost substantial revenue after some fans entered the stadium without paying during the team's clash with United Lions.
Speaking to Tellzim News, Mutare City Rovers spokesperson Clayton Masekesa said they lost revenue after many people easily made their way into the stadium earlier than expected.
"We had a challenge in gate takings as many people had already made their way to the game earlier than expected so we have engaged the council's community services department to assist," said Masekesa.
Mutare City Rovers chairman and ward 18 councillor Kudakwashe Chisango said they had engaged the council to come up with a stronger security wall to avoid such problems in the future.
"We had to engage council security to help during the game against United Lions and we have now approached the council to come up with a stronger security wall and our hope is to have a 12 inch war to replace the damaged one," said Chisango.
During the game, which Mutare City Rovers went on to win by three goals to nil, council security could be seen roaming around the ground with dogs to prevent more chancers from sneaking into the stadium.
Mayor Tatenda Nhamarare said council should quickly look into the matter and rectify the problem.
"As council, we going to quickly look into the matter even if it means going to take something from our coffers so that we repair our ground as it will continue to play host for more games," said Nhamarare.sport
Share !