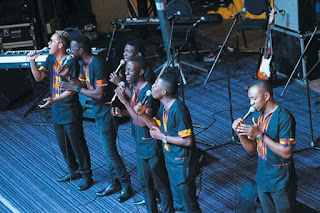 ZVISHAVANE - The Bulawayo-based acapella group Family Voices (pictured), made up of Brighton Ncube, Bobby James Odendaal, Tinashe Chitsaka, Michael Sibanda, Ronald Pearson Magigwani and Melusi Sibanda will tour many places including Gweru and Zvishavane this winter.
The group has been nominated for the Imbube Arts award as one of the best acapella group and has been building on the momentum to take their music to a broader audience through their 14-track album, My joy.
Magigwani, who is the group's public relation officer said they had neglected their Midlands fans for a long time but were now ready to come back to them.
"We are bringing our music live to our fans across the province as a way of spreading the gospel of the Lord and serving souls in the process," Magigwani said.
One of the biggest achievement the existing Family Voices group seem to have made is to stay together from 2006 up to date.
The original group of the now SA-based musicians Mkhululi Bhebhe and Eric Moyo was formed in 1999 but Eric Moyo ushered in the likes of Brighton Ncube and others from 2002 to 2006.
The current group won Bulawayo Got Talent in 2011, performed at the Harare International Festival of the Arts (Hifa) 2012 and were called to perform at many State events for many years.
They are currently working with some of the greatest legends including Oliver Mutukudzi as well as Avis the Psalmist, having recently been called to perform at the wedding of Thandaza and Rathomeng in an episode of popular South African soapie, Muvhango.
"We just finished our first video shoot and we hope to come to Midlands and do a number of shows to push the album and the videos," said Magigwana.entertainment
Share !