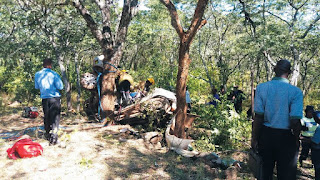 People gather around the wrecked vehicle at the accident scene

SHURUGWI – There was shock after four boys working at a carwash in town died last Thursday in a horrific road accident while rushing to Gweru to fix a client's car which had been damaged when they misused it.
Though no police comment could immediately be obtained, the accident occurred after Shurugwi Hospital environmental health officer Francis Maronde went to the carwash in town and left his Toyota Allion there for cleaning.
The boys who work at the carwash reportedly took advantage of Maronde's absence to drive around in the vehicle but as fate would have it, damaged the car in the process.
They then reportedly decided to quickly drive the car to Gweru for fixing before the owner came back but little did they know that it would be the end of them all.
As they approached Chikwingwizha, the driver lost control of the vehicle and it skidded off the road, rolled and crashed into a big tree, killing three of them immediately while the other died later at the spot before emergency services had arrived.
The car was damaged beyond repair and the wreckage was yet to be removed from the accident scene by the time of writing.
Among them was a form one student who was identified as son to Sister Esther Thomas who happens to be Maronde's colleague at work.
Another victim was identified as a tenant at Sister Thomas's place while the other was son to a Shurugwi Covenant Ministry church pastor.
Maronde could not be reached for comment but sources said the boys were in the habit of abusing their clients' vehicle whenever they got a chance.
It was also said that none of the four boys had a drivers' licence.local
Share !