Get ready for Command Votes 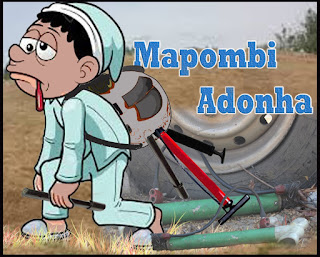 Mapombi will not hesitate to tell you that Zimbabwe is slowly but surely being turned into a military zone. Yes, everything is being militarized and 'commandisised' and it's now clear that the army is running this country now.
At first, Mapombi thought Mnangagwa only used the term Command Agriculture due to his limited terminology base but I later realised it was deliberate. In fact, it was an announcement yekuti muchatongwa neArmy mukazvirega.
To start with, the word 'command' is more often used by the military and the noun means an order to do something. Mind you when one is given an order there is no two ways about it except to follow the command religiously.
Having suffered successive drought seasons for close to a decade now, Zanu PF thought of employing military tactics in agriculture in a desperate effort to scare away hunger.  They are also trying to solve the current economic crisis by what they term 'command economy'. Kkkkkkkk and their solution is printing more Bond Coins.
Civil servants are now receiving Bond Coins at banks thanks to the 'command economy' introduced by our government.  Muchatambira maBond Coins kusvika mati baba nemuridzo. Ndoinonzi command economy ka iyi; they have commanded Dr Mangudya to print more coins and ari kuuya zveshuwa. Ko anga itawo sei Mangudya when the commander-In-Chief has said so. More bond coins to the people!
Mapombi now understand why Prof Jonso is against Mnangagwa's rise – tinopera tese kutongwa with an iron fist. Imagine he is trying to command everything including livestock kuzoti ava president chokwadi tinokuvara nedictatorship. Now with the likes of Karikoga Kaseke suggesting an adoption of 'command tourism', tichaonerera zvedu.
It seems Mnangagwa likes to command than anything else – there is no room for negotiation or open discussion.  Prof Moyo said this guy is shrewd and Mapombi is beginning to believe that because the idea of him choosing the term 'command what-what' is no accident but it's a warning to the Zimbabweans of what is ahead.
It's a warning of his intension to thwart democracy in the country by militarising everything – there will be serious use of force where he will command citizens to do anything he thinks of.
Mapombi is even afraid that there will be command sex zviye zvaiitiwa kuhondo. I know many people would think ndava kupenga worse but I'm telling you. Muchazondiudza henyu kuti ndairevesa.
But I am seeing disaster come 2018; there is likely to be 'command votes' where the electorate will be given command on who to vote for. Whether the 'command vote' will start at Zanu PF primaries or at the general elections Mapombi doesn't care much about that but the truth is an order to vote for someone will be given.
Mapombi will not want to remind many of the Gukurahundi era but is afraid that would happen if people protest the 'command vote'. Chete vamwe tiri varwere vepfungwa asi tatoreva hedu – uyu Mnangagwa womoda uyu uchatiparira with his 'command everything' style of development yaari kuparidza iyi. Anyway vane nzeve dzokunzwa vanzwa kana vasinawo wait until 'command votes' is effected then mozopupura.  By that time Mapombi would have sought asylum in Mozambique kkkkkkkk because I don't want to be crushed like a cockroach.
By the way, Mapombi heard President Robert Mugabe has started a spirited campaign against Mnangagwa under his 'meet the youth' rallies. The only leader Zimbabwe has ever known said ndiani akati the Karangas will rule next.
And to show that the rallies are exactly meant to send strong message to Mnangagwa kuti forget about your wishful thinking they have started in Marondera, now they are going to Manicaland where Mnangagwa is said to be commanding a bit of support and then straight to his stronghold, Masvingo province after that.
Obviously from Masvingo they would go to the Midlands and the whole idea is to send a message kuti makanyeberewa if you think Mnangagwa is the next president handisati ndapera.
In order to frustrate the Karangas, the 'Zezuru unconquerable' song will be played at Mucheke Stadium.  Watch the space!
But with the way Mnangagwa wants to command everything, Mapombi will not give a damn if he loses the race – we want someone who respects the rule of law not one who wants to militarise everything. Let Chiwenga be in command of the army and a democrat lead the country, not commanding the country. Hazvibude!
It's almost lunch time guys let me go ndindokanga hangu maputi angu for lunch. These days rotten bananas are hard to come by. Haachaore zvekumhanya mabanana because of the chilling temperatures. By the way I heard the President is back from the Oceans summit. Kkkkkkk shungu zvadzoita so – Zimbabwe is a landlocked country. Period! Anyway, enjoy travelling and allowances Cdes – mind you kana muchero wonyanya kunaka zivai wonakira kukuva.
I look forward to seeing you in Mutare for the Mugabe rally guys. I also look forward to seeing Mphoko ikoko zvekare. I am sure Mphoko will donate few chicks for the youth and incubators kkkkkkkk imwe leadership so. Zvoda moyo murefu shuwa. Mboko imboko!mapombi
Share !