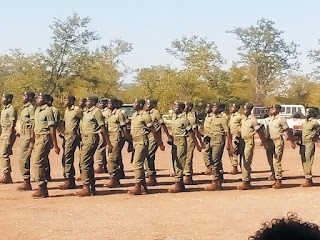 CHIREDZI - The Frankfurt Zoological Society, through the Gonarezhou Conservation Trust, is working to upgrade the Gonarezhou National Park to meet international standards while devising new strategies to fight the scourge of poaching.
This was heard last week during a pass out parade for new game rangers where it was revealed that 'The Big Five' group of wild animals will also be introduced into the park to boost the tourism potential of the vast park, with standards expected to match those of Kruger National Park in neighbouring South Africa.
After failing to meet the operational requirements of the park and losing the war against poaching, government partnered the zoological society which has already bought equipment and vehicles being used in the anti-poaching campaign.
Director of the Gonarezhou Conservation Trust, Hugo van der Weisthuizen said new Toyota land cruiser patrol vehicles had been bought and some lodges had been upgraded.
"We use more than $150 000 on wages and anti-poaching equipment every month and we recently bought new equipment that will be used by rangers on their daily patrols. We are also upgrading our lodges, the likes of Svimuwini Lodge," said van der Weisthuizen.
Gonarezhou conservation trustee and board member, Jerry Gotora said poaching had been reduced and they will soon re-introduce 'The Big Five' in the conservation.
"Poaching has been reduced to a new minimum and we now have 156 game rangers from the 56 that we previously had. The expectations are that we will reduce poaching to nil.
"We are aiming to upgrade this conservation to a level where we will be having more animals in the park because tourists come to see animals not trees…we are also going to introduce rhinos back into the park in the near future probably next year.
"That will enhance tourism as we will be having The Big Five because currently we only have the big three," said Gotora.local
Share !