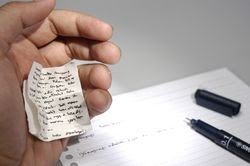 CHIVHU - With mathematics proving to be one of the most key subjects in the Zimbabwean education curriculum, two Liebenberg High School upper six students last Thursday allegedly conspired to have the brighter of the two write an exam for the other.
The subterfuge was however unmasked in the second sitting of the exam, and the alleged culprits, who may not be named since they are minors, were waiting for action to be taken against them by the time of going to print.
It is said the cheating idea of the two pupils worked successfully in the sitting for first examination paper but things turned nasty for them during the second one when the invigilator discovered that the person who was writing was not the actual person who had registered.
The invigilator silently went on to report the case to the Deputy Headmaster without raising eyebrows and the actual candidate, who was busy doing lessons, was detained till the end of the exam to prove that a deception was taking place.
After thorough investigations, it was unearthed that the two had been moving around boasting to other upper six students that the trick had successfully worked on the first exam paper and would work out again on the second.
Chikomba District Schools Inspector (DSI) Emmanuel Kwenda professed knowledge of the incident but said he could not disclose much as he was out of office.
"I have heard of the incident and have visited the school but as for now, I cannot divulge much because there is paper work that should be done before any action can be taken. In due course, I will get back to you," said Kwenda.local