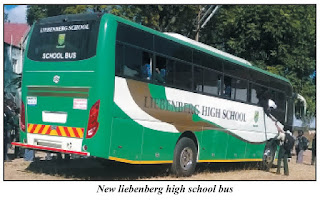 CHIVHU - It was all joy at last for Liebenberg High School after the bus purchased some time ago was finally delivered home following long delays caused by difficulties in paying exercise duty to the tune of  US$33 000.
The school bus, which was purchased in October last year, could not to be brought home immediately after purchase due to issues of exercise duty but was eventually unveiled last week with  pupils and staff members taking a joy ride in it around Chivhu.
School Development Committee (SDC) chairperson Pastor Makoni Gorede praised Chikomba West Member of Parliament, Industry minister Mike Bimha for his support and contribution.
"We are excited with the development because finally, we have managed to get the bus here. We purchased it in October last year but duty worth US$33 000 had hindered our process. Thanks to the government through our MP who negotiated with other responsible ministers, we were allowed to take the bus duty-free," Goredema said.
He paid tribute to the efforts of parents who paid school fees and bus levy despite living in a difficult economy.
He urged parents to keep supporting school projects in whatever way for the betterment of learning conditions.
The bus was purchased at a cost of US$135 000 through a bank loan and is being paid in five instalments with two already paid to the bank.
Goredema urged parents to keep paying fees for their children in order to enable the completion of bank loan repayments.
Parents and the community expressed joy and excitement with the development saying that they had despaired on the bus because of the delays in getting it to the school.education
Share !