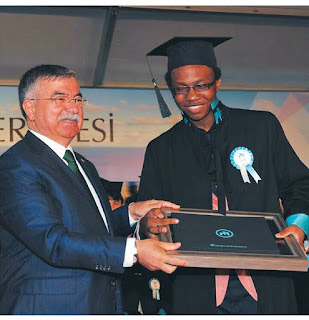 Jareth Moyo has put Masvingo on the world map by coming first among the 2017 Computer Science and Engineering graduates at Istanbul Sehir University in Turkey.
The last born in a family of four, Jareth is son to legendary musician, Jonah Moyo who is now based in South Africa.
From 2007 – 2012, Jareth was a student at Kyle College where he graduated with distinctions in Cambridge International Maths, Accounting and Economics for which he was awarded the Best Commercial Student trophy.
In 2013, he received a full super scholarship to study a Bachelor's Degree in Computer Science and Engineering in Turkey.
His time at Istanbul University has been marked by a series of achievements as he has been a Teaching Assistant in Discrete Mathematics from 2015-16.
In 2016, he was also a Teaching Assistant in Programming Practice as well as a Software Developer Intern before becoming a Teaching Assistant in Machine Learning.
Besides giving tutorials, he was a research assistant in Natural Language Processing for three months. He also became responsible for the creation of projects and setting of exams which were taken by both undergraduate and masters students.
Jareth's exploits at the university comes as a wonder given his lack of sufficient background in Engineering since he had majored in commercials at 'A' Level, and had to compete with students who had already studied Physics and Computer Science in high school.
Jareth, who intends to further his studies up to PhD level and has a particular interest in becoming a data scientist or anything to do with artificial intelligence, encourages young people to be dedicated and committed to career building.
"Don't take education as a chore but as an investment in your future. You have the potential to become anything you set your mind to, but it takes hard work and dedication. Stay focused and you will be rewarded," Jareth said.education
Share !