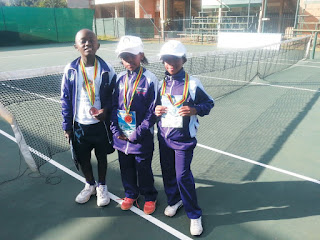 HARARE - Pupils from Masvingo Tennis Foundation Trust who represented Masvingo province in the Ambassador Tournament which was played at Harare Sports Club last weekend performed impressively and brought home two medals.
Tatenda Chipfakacha from Helen McGhee and Shantel Langa from Vic Juniour won silver medals in the orange category of the games while twelve-year-old Anthony Mazvimba from Helen McGhee won a bronze medal.
The team comprised 11 pupils between the ages of eight and 14 from schools like Victoria Juniour, Don Bosco, Chikato among others.
Coaches Privy Fanisai and Kuda Chizemwe said they were happy with the performance and as the medals had a major significance in their sporting ambitions.
Fanisai hailed the schools mainly St Don Bosco and Francis Aphiri Primary Schools for sponsoring their pupils and urged other schools to do likewise in the next tournaments.
"I also want to thank the parents for their support in funding the trust. The same goes for the schools that sponsored their pupils. I encourage other schools to do the same when we go for other tournaments like this.
"I am pleased by the pupils' performance; they made me proud and I want to encourage them to continue with that kind of commitment because most of them managed to reach semi-finals," said Fanisai.
Masvingo Tennis Foundation Trust kits are sponsored by Metropolis Pharmacy and one Usman Wachii.sport
Share !