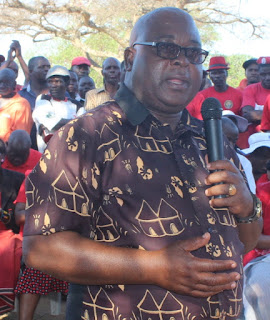 MASVINGO - One of the opposition MDC-T's two vice presidents, Engineer Elias Mudzuri last week told a gathering at Zimuto Siding in Masvingo North that President Robert Mugabe is quaking in his boots over the proposed coalition of opposition parties which party leader Morgan Tsvangirai is expected to lead.
Mudzuri said Mugabe knows that Tsvangirai is the only person who is popular with the electorate and having him as the face of the coalition is Zanu PF's worst nightmare.
"Mugabe would rather have Tsvangirai take a back seat in the coalition because he is the only opposition he fears.
"Tsvangirai is going to lead the coalition and other parties are coming in to support Tsvangirai. Brand Tsvangirai is well-known and in 2018 we say Morgan is more," said Mudzuri.
Mudzuri said the days people used to be threatened by violence are over and everyone should register to vote once the registration process opens.
"The new Biometric Voting System has dissolved the old voters' roll so once registration is open, please take everyone to go and register. We cannot take chances in 2018," said Mudzuri.
He supported the Bereka Mwana campaign launched by the party's youth assembly and called for the intensification of the door to door campaign.
Zanu PF tried to disrupt the meeting but failed and resolved to hold a counter meeting a stone throw away venue from the MDC-T's.
The meeting was also graced by other senior members of the party including Amos Chibaya, Tapiwa Mashakada and the Masvingo provincial executive.politics,topnews
Share !