MyAge engages in youth through sports 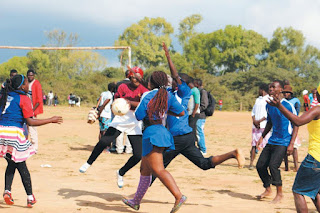 MASVINGO – MyAge Zimbabwe last week organised a Youth Sports Tournament at Nemanwa business centre as part of the organisation's Youth Engage Project which aims to contribute to 'The 2030 Agenda for Sustainable Development for Children in Africa: Accelerating Protection, Empowerment and Equal Opportunity' goal.
The event was aimed at advocacy work towards meaningful involvement and inclusion of young people in community decision-making spaces through village development committees as well as ward development committees.
It was also a way of creating a platform for dialogue, networking and cross learning between youths and policy makers and community leaders.
Soccer and netball games were played between male and female teams as a way of breaking some of the stereotypes that society has long preserved with regards to gender vis-à-vis capability.
Winning teams walked away with various prizes including sports kits for use in the future.
Targeted wards included ward 6, 7, 9, 12, 19, 23, 26 and 33, and targeted groups of people included local leaders like councillors, traditional leaders, the local Member of Parliament, representatives from the Ministry of Youth Indigenisation and Economic Empowerment, as well as young men and women from the wards.
MyAge programmes manager Joseph Njowa said the programme was vital as it connected the youths with the government at local level.
"This networking and connectedness is an important linkage which connects young people with the government," said Njowa.sport
Share !