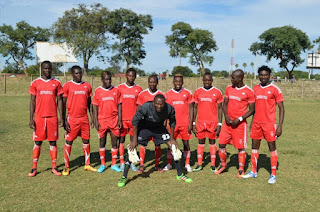 Mucheke Pirates travelled back home smiling all the way from Mutoko after beating hosts Mukanya Bullets by a convincing one nil score line.
In a match played at Chikondoma Stadium, Mucheke Pirates got their score from inform linkman, Tawanda Pitiri who hypnotised the opponents during the entire 90 minutes.
Pitiri scored a beauty of a header from an Alvin Gerald cross, leaving the Mukanya goalkeeper in tatters.
The win was Pirates 'first away victory   which saw the team shooting to the second position in on the log, with Buffaloes on top with a three points lead margin.
Pirates has so won four of the eight games they played so far, lost two and drew two.
Their latest win has been received with jubilation by hordes of supporters with the team executive saying they were delighted by the win.

"We are excited to grab maximum points away from home. Winning away is important to us and we hail our players for a good performance and we urge them to continue snatching maximum points in
future away games," team spokesperson, Godfrey Mtimba said.
Dzinochekwa Baba as the team is widely known as in the football circles of Masvingo province had a fine afternoon after they managed to contain the host without much difficulties.
The stable defence marshalled by Andrew Tavinving, George Magariro, Alvin Bhero and Bhobha had  little  challenges from Mukanya's forwards whom  they shut out of the game for the better part of the match.
In the midfield, Pitiri had a field day; conquering the middle of the park and baffling his stunned opponents.
He had fine exchanges of passes with his fellow midfield men, Forward Mkambanga, Tafadzwa Mahori and Asani Kachepa.
Forwards Caleb Masocha and Keith Chikotora could have added their names on the score sheet but missed several chances that came their way.
Pirates this week takes on Black Eagles of Birchnough Bridge in another away match. A second win away is expected to boost their chances of Premiership promotion.sport
Share !