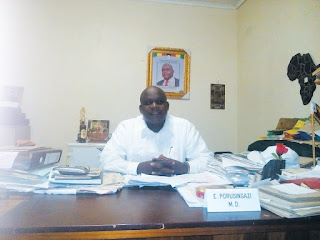 CHIPINGE – As the country hurtles towards the long-awaited 2018 harmonised elections at which sitting Members of Parliament are likely to sweat to keep their seat, Chipinge South's Enoch Porusingazi is fast moving to fulfil some of the election promises he made.
The MP is spearheading a number of developmental projects including drilling boreholes and resuscitating roads that were extensively damaged by heavy flooding earlier this year.
Like many Zanu PF MPs, Porusingazi has spent much of his term engaged in the party's messy factional battles; more often than not playing mudslinging games with his Chipinge East nemesis, Dr Win Mlambo and losing vital time to engage his constituents in the process.
But Porusingazi now seems to have awakened to the fact that time is no longer on his side and he has to hit the ground running or risk Dr Mlambo's preferred candidate, Wilson Khumbula walking away with the prize in the Zanu PF primaries.
Speaking at the Cottco outreach program in Checheche recently, Porusingazi said he had already sourced fuel from various companies for the earth moving equipment that are working on the constituency's road.
"The rainy season is over now but it has left for us a lot of work to do in terms of rehabilitating damaged roads and bridges. As a Member of Parliament, my specific role is to look for development partners to help develop this constituency.
"As you can all witness, we have began grading some of the roads and we are going to put gravel so that they can last for years. I got fuel from ETG Parrogate and Cottco and Green Fuel has also promised to provide us with more fuel," said Porusingazi.topnews
Share !