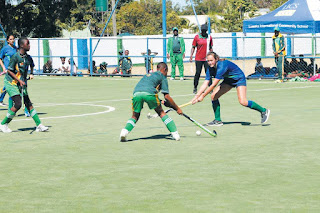 LUSAKA – Fatigue-stricken Shabani Primary School teams put up spirited performance at an invitational hockey tournament here despite going through a torrid time at the border when Zambian authorities initially refused recognise the group travel document issued to the team by the Registrar General (RG)'s office.
The RG's office failed to timely process the passports of some 27 members of the team and had to process a group travel document which caused the group to be delayed at the border for 21 hours as Zambian immigration officials claimed that the document was not familiar.
It took the intervention of Zvishavane-Ngezi Member of Parliament John Holder and the Minister of Sports and Recreation Makhosini Hlongwani before the group could be allowed into Zambia.
The teams had to play all their games on Saturday when all their opponents had played some of their games on Friday.
However, they gave a good account of themselves and the boys started the day against Musikili Primary School and drew two all.
They then played and lost two nil to Italian School of Lusaka coached by fellow Zimbabwean sports teacher Ishmael Mbatata.
The team then drew one all with Lusaka International Community School but lost their last match due to increased fatigue with the girls winning one match and losing three.
After the tournament, Shabani Primary School head Joy Mdumo encouraged the pupils to continue working hard and to take the positives they learnt in Zambia.