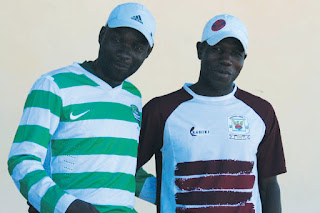 ZVISHAVANE – 'Whose yard is it?' was the question which found no answer as the mining town's premier league soccer giants Shabanie Mine FC and FC Platinum ended their much fancied bout in a draw at Maglas over the weekend.
Last weekend, Zvishavane was divided into maroon and white, and green and white according to fans' allegiance to their respective teams but united as one family for the love of the game. They sang along supporting their teams in a fully packed Maglas stadium during the incident-free match.
No one expected Shabanie Mine FC to put up a spirited fight against their arch rivals FC Platinum the way they did as their camp often faces challenges of training session boycotts by players due to cash constraints.
It was however the smooth competition between the rivals that got many soccer fans talking as it contrasts sharply with the violence that often plague encounters between other big rivals like Dynamos and Highlanders.
The home team found themselves one nil behind in just three minutes of play when Talent Chawapiwa cutely slotted in a goal after Shabanie Mine made a defence error.
They however made a quick comeback with an accurate pass from Delany Chivandire to Wellington Taderera who slotted the ball past the exposed FC Platinum goalie Petros Mhari.
FC Platinum are the latest giants in Zimbabwean football who have failed to get a clear victory against the newly-promoted Shabanie Mine FC, joining the likes of Caps United, Dynamos and Highlanders.
FC Platinum assistant coach Lizwe Svesve was happy with the results at Maglas as his side managed a point away from home.
"It was a good game and I think a draw was a fair result for both teams," Svesve said.
Takesure Chiragwi, the Shabanie Mine gaffer was delighted with the game which became his first experience of the Zvishavane derby.
"A draw is a fair result, I am happy that the boys managed to come back after conceding an early goal," Chiragwi said.sport
Share !