Home » Carousel » Local » Soldier up for robbery in Rusape

Soldier up for robbery in Rusape 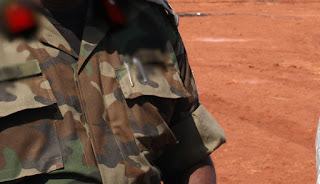 RUSAPE - A Harare-based soldier is on the run after he failed to turn up for court to face trial on allegation of holding up a Rusape family and robbing them of their valuables.
Trymore Kachini (33) of One Commando Regiment Head Quarters allegedly robbed a village family of its cell phones after masquerading as a plain-clothes police officer.
Kachini allegedly committed the offence together with two accomplices who are still at large.
He was supposed to appear in court last week but failed to show up and only his lawyer was in attendance. The court then issued a warrant of arrest against him.
The court heard that Kachini and his accomplices accused a villager, Friday Phiri of having stolen government money and forcibly took his family's cell phones.
The three went to Phiri's house and allegedly introduced themselves as detectives from CID who wanted to question Phiri about the theft case in which he was allegedly involved.
Kachini allegedly demanded the car keys but Phiri refused to surrender them and he then produced handcuffs and ordered all the family members to surrender their cell phones.
Kachini later assaulted Phiri all over his body but ne of Phiri's sons they managed to overpower him and screamed for help.
When neighbours came to their rescue, Kachini's accomplices fled and jumped into a Honda Fit vehicle leaving him alone. He was taken to Rusape police station.local
Share !