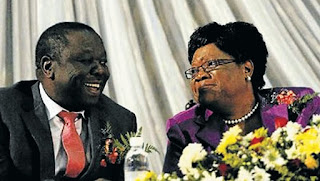 MASVINGO – MDC-T leader Morgan Tsvangirai and his National People's Party (NPP) counterpart Joice Mujuru, both of who are locked in a bitter contest to lead the envisaged grand coalition of opposition parties, have been urged to sober up as the much anticipated 2018 general elections fast approach.
Mujuru and Tsvangirai, have of late been working publicly to undo each other with each trying to portray themselves as the best candidate to lead the grand coalition.
Political analyst Dr Takavafira Zhou highlighted that the coalition was now long overdue and challenged both Tsvangirai and Mujuru to sober up.
Dr Zhou said the two leaders should first put the interest of the nation before their personal egos.
"There is no doubt even in Mujuru's mind that Tsvangirai is a better leader of the coalition. It should be noted that Mujuru is only in opposition because she was fired from Zanu PF and she is more emotional rather than rational.
"Mujuru still has skeletons in her closet and Zimbabweans are not ready to trust her as a leader. She still has a lot to learn from opposition politics but her input into the coalition will go a long way. She will bring the liberation struggle ingredient which will appeal to some disgruntled war veterans," said Dr Zhou.
While Zanu PF seems to have already hit the ground running in preparation for the harmonised 2018 elections, opposition parties are still to conclude the coalition talks by which they are expected to choose a single candidate to face the 94-year-old President Robert Mugabe.
Insinuations coming from MDC-T youth leaders and other members point to a no deal for opposition parties unless Tsvangirai is proclaimed leader of the proposed coalition.
Mujuru's party, on the other hand, is also making indications that it will not accept a deal that would make their leader play second fiddle to anybody.
MDC-T national youth boss, Happymore Chidziva said their long-held stance that Tsvangirai should lead the coalition still stood.
"As MDC youth assembly, we are very clear and supportive of our leader. President Tsvangirai has been tasked to represent the party in coalition talks with one objective of being the leader.
"We know others also want to lead but Tsvangirai is a tried and tested brand. He is the only one who has defeated Mugabe in an election," said Chidziva.
He said all progressive parties approaching the coalition table should rally behind Tsvangirai lest they risk being accused of being enemies of progress.
"Tsvangirai is the only leader who can guarantee Mugabe's defeat and has a huge following. We are not saying we do not need other parties but in as far as leading the coalition is concerned, we are not compromising.
"We want a coalition leadership which is trusted by the electorate, a leadership which is not questionable or is suspected to have links to Zanu PF. I am not pointing fingers but we stand clear on that position," said Chidziva.
Mujuru also has been publicly claiming that she is a better candidate to lead the coalition citing her war credentials and her appealing to thousands who benefited from the infamous land invasions at the turn of the millennium.topnews
Share !