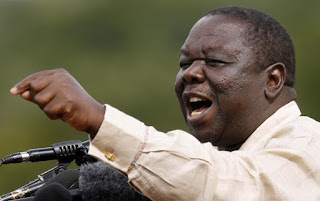 GWERU – MDC-T leader Morgan Tsvangirai said Zimbabweans should vote wisely if hopes for a US$100 billion economy are to be realised anytime soon.
Addressing thousands of people gathered at Mkoba stadium, Gweru, on Saturday, Tsvangirai promised a billion dollar economy for Zimbabwe.
"A $100 billion economy awaits Zimbabwe, lets vote wisely," Tsvangirai said.
Tsvangirai encouraged supporters to register as voters and turnout in their numbers to unseat President Robert Mugabe and Zanu PF, telling them that the future rested squarely in their hands.
"The future of this country is in our hands. So let's come out in our numbers and vote wisely," the bullish ex-prime minister told supporters.
As the nation is advances towards the 'make or break' 2018 elections, the MDC-T, Tsvangirai said was mobilising its supporters to unseat the ruling government in the general election.
Turing to young people who attended the rally in their numbers, Tsvangirai said disinterest among the youths was crushing hopes for a better Zimbabwe.
"As youths, you constitute more than 60 percent of the population and it is, therefore, important that you go and register to vote," the confident veteran opposition figurehead told his supporters.

"Unfortunately, only five percent of you people (youths) go and vote and yet you expect that this regime (President Robert Mugabe's Zanu-PF government) to be removed.
"You should do self-introspection and ask yourselves what we should do in defining our future. Otherwise the majority of you will become old and die without ever working for yourselves," he added.
The Gweru rally was attended by thousands of opposition supporters with many of them saying it was an important pointer to who should lead the envisaged grand coalition of opposition parties which is expected to deal the final blow to Zanu PF in 2018.local
Share !