We are owed over 500k, says Chiredzi DSI 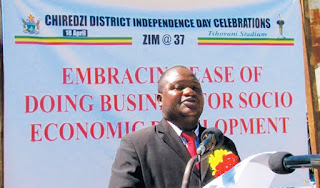 CHIREDZI - Chiredzi District Schools Inspector (DSI) Petronella Nyangwe has pleaded with primary and secondary schools in the district to pay their outstanding Better Schools Programme Zimbabwe (BSPZ) funds which are critical to facilitating educational development.
Nyangwe said development of education in the district was being slowed because of money to the tune of half a million dollars which the education department is owed by schools across the district.
"Primary schools owe us $102 501 020 while secondary schools owe us $428 91 900 giving us a total of $531 420 020," Nyangwe said, encouraging parents to do their best and pay up what they owe so that operations could run smoothly.
She however acknowledged that the economic situation in the country was making it difficult for parents to pay fees for their children in time, resulting in only a tenth of BSPZ funds being collected from schools.
"We appeal to our school heads and School Development Committees to help our parents to understand the importance of clearing school fees arrears though we do not allow pupils to be sent back home. We have consulted our chiefs to help us encourage parents to pay up their arrears," she said.
Her remarks follows concerns emanating from different quarters that progress in the completion of the district's BSPZ building was not satisfactory as all other districts had either completed their own work or were far ahead of Chiredzi.
"We have prepared a document which we are distributing to various stakeholders seeking assistance to help us complete the expensive double-storey building," said Nyangwe.
District Administrator (DA) Ndeya Nyede said his office had held a meeting with traditional leaders to seek their help in encouraging parents to pay off their fees arrears.
"We have already sat down with chiefs and they acknowledged that there was a challenge in as far as timely payment of fees for school children was concerned," said Nyede.
He said he was hopeful that construction of the BSPZ building will be completed despite the huge challenges being faced by stakeholders in pulling together resources for the work to progress at a faster pace.local
Share !