Will Zivhu take over Chivi South? 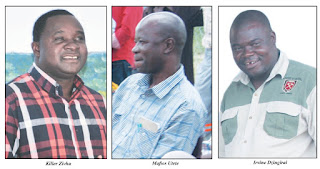 Does he really have what it takes to be the national assembly representative for the Chivi South electorate? Dr Killer Zivhu – can he? Zivhu is touted as the best Zanu PF candidate to replace the incumbent Maphios Utete at primaries before the much anticipated 2018 general elections.
Though he downplays the idea that he is eyeing Chivi South constituency, insisting that he wants to retain his position as councillor and Chivi RDC chairperson respectively, reliable sources in Zanu PF revealed that the philanthropist was readying himself for the national assembly challenge.
Having been involved in several projects in Chivi South, though many were left unfinished, it has become apparent that Zivhu might be interested in contesting for the constituency in 2018.
Zivhu built homes for less-privileged families in Chivi, donated food stuffs, pledged to build classroom blocks for a school in Nyahombe, and, most importantly perhaps, came up with his village ZimAsset initiative. He also introduced reflectors for domestic animals amid reports that livestock especially cattle and donkeys were being killed at night in collisions with haulage trucks along Beitbridge - Masvingo highway.
The project was launched by Minister of State for Provincial Affairs for Masvingo Shuvai Mahofa at Zivhu's homestead but it appears to have suffered stillbirth.
These failed or rather yet to be fulfilled projects will certainly not dent Zivhu's ambitions as he is currently the best candidate in the race to succeed Utete.
Zivhu has managed to put Chivi district on the map due to extensive coverage he has been given by the media on various projects he initiated in the drought-stricken district. The media also decided to put a blind eye on Zivhu's vices – whether they were paid or were not, we are not privy to that.
Anyway, that would not discredit Zivhu in any way as he still remains far much better than the incumbent Utete. Utete is generally passive and media shy, and he has done very little, if there is any, for the people of Chivi South.  He is disadvantaged by lack of resources to fulfill some of the promises he made during the run-up to July 31, 2013 elections.
The soft-sopoken legislator seemed to have already surrendered the constituency to Zivhu  by the way he addresses the electorate each time he is invited to do so at functions organised by the Chivi RDC chairperson.
But as a man, Utete would not easily give up without a fight and is said to be strategising for the party primaries.  Being a former intelligence person, Utete might spring surprises as he did during 2013 Zanu PF primaries when he emerged the winner when it was least expected. Of course, there were reports that the primaries were rigged in his favour against Irvine Dzingirai and Jonathan Gapare.
Who knows, maybe Utete would still use the same tactics he used during the 2013 primaries with the hope that he has not lost the support of those who propelled him to victory then.
But he first has to face Gapare in the primaries once more. The Ngundu Rock Motel owner is said to be eyeing the constituency again after two successive defeats in the previous elections. Gapare, a prominent business person and property developer, has enough resources but his approach is more applicable in developed and more democratic countries.
He talks a lot of sense but his message needs to be simplified if it is to be appreciated by the rural electorate of Chivi South. Gapare is more of a technocrat!
There is also Mai Hungoidza who is touted as a dark horse in the race. She is the only woman who has so far emerged in Chivi South and she is reported to have covered a lot of ground. The Hungoidza family runs many businesses in Chivi and the name is very popular in the district. Still, I would not want to believe Mai Hungoidza is a dark horse. Maybe she needs a charismatic campaign manager who can convince the majority that she is worthy voting for.
Former Chivi South legislator Dzingirai's name is also said to be among interested candidates but the truth is he stands no chance at all. Dzingirai has no resources to challenge other candidates like Zivhu and Gapare unless he is in the race just to add numbers.
He recently rejoined Zanu PF after a short stint in opposition politics therefore; it will be a good idea if he concentrates more on regaining the confidence of Zanu PF leadership before he contests any position even in the party.
The ultimate winner from Zanu PF is likely going to have a walkover as other political parties, including Movement for Democratic Change (MDC-T) have no candidates so far. Whoever the opposition fields as a candidate will certainly stand no chance in Chivi South.

Zivhu openly says he is not so educated that at one point he was a sugarcane cutter at Triangle in Chiredzi. Having grown up in Chivi under the custody of his grandmother, Zivhu did not manage to go beyond Ordinary Level but he managed to use his natural intelligence and wisdom to acquire wealth and he often brags of having headaches to choose which car to drive on a particular day.
But his political experience in active politics cannot stretch beyond a decade. He, however, has managed to maneuver very fast and is now in the provincial executive. Zivhu has done extremely well for the party and has donated quite a number of stuff to the party and across the country. He is said to be sitting at the border of the two Zanu PF factions, Generation 40 (G40) which is rapidly opposed to Vice President Emmerson Mnangagwa to replace President Robert Mugabe, and Team Lacoste. That might his biggest challenge if strong candidates emerge from both factions.
Gapare is an articulate guy with at least a degree in business management and is into property development. Gapare contested and lost two successive primaries for Chivi South. Hopefully, he will get things right this time around.
He has been an active member of Zanu PF for over two decades now though the experience has failed to yield any positive results for him in the past. Gapare also lacks factional branding and that might frustrate his ambitions again as Zanu PF politics has since become a game of factions.
Dzingirai went to the School of Mines College in Bulawayo and worked at Renco Mine before deciding to join active politics. At one point, Dzingirai was suspected to have connections with MDC-T due to his relationship with then opposition legislators Harrison Mudzuri and Enerst Mudavanhu. It will however, take a bit of time for Dzingirai to command yet another huge following in Zanu PF  especially having rejoined the party just recently.
For contributions e-mail pkuzipa@tellzim.com or call 0772 729 937 /
0718 729 937
Share !